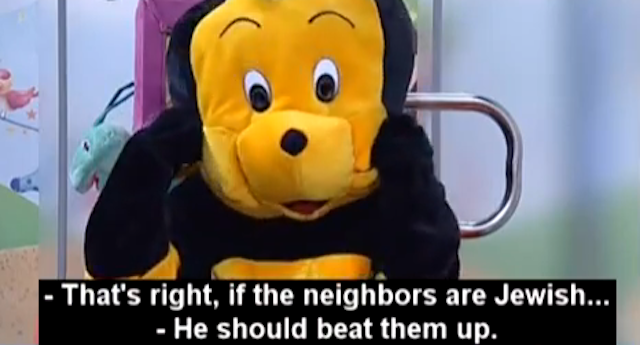 This doesn’t bode well for the future.

Ok I’m gonna start this with the disclaimer that the subtitles on this video might NOT be true, but from the sources I’m reading it on it looks like it is 100% true, and if this is the case then this is pretty messed up right there.

The TV show is called ‘The Pioneers Of Tomorrow’ and is a Hamas (Palestinian terrorist organisation) sponsored TV Show that is aimed at Palestinian children, and looks like it’s trying to instil political ideology in them at a very young age via loveable children’s characters which is both equal parts depressing and disturbing.

In the clip below you can see a friendly looking bumble bee dude called Nahoul talking to children and telling them that if they see a Jew then they need to either punch, throw stones or shoot them. He then encourages a young girl who wants to be a policewoman when she grows up to shoot and kill all the Jews. I really hope this isn’t true but part of me suspects it is. Grim.

Apparently this isn’t an isolated incident either, as a research organisation called the Palestinian Media Watch claims that there is a load of similar content to this broadcast on Palestinian television every day. The future of the Arab Israeli conflict doesn’t look good.