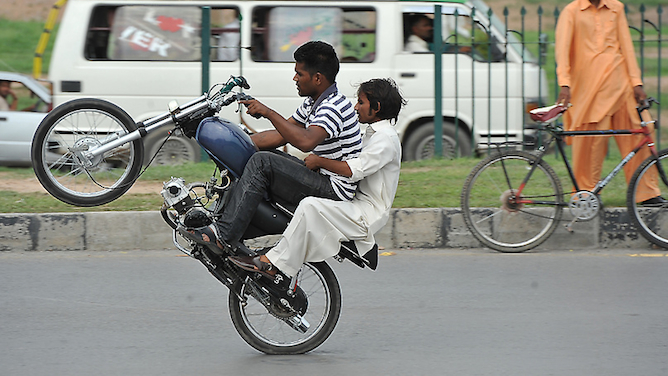 Pakistani motorcyclists are complete badasses and this video completely proves it.

I’ve never ridden a motorcycle but I know some people who have and they say that it’s really tough when two people are on it together and if they don’t move their bodies in exactly the right way when they’re turning then it’s pretty easy to just bail and fall off your motorcycle, kinda like Puff Daddy at the start of that music video.

But these Pakistani guys don’t give a fuck and have really gone for this. I said it’s kinda difficult when you’re riding a motorbike with two people but this is next level. They’ve got FIVE people on the motorbike AND the guy is pulling a massive wheelie too. I got no idea how they pull this off but it’s pretty impressive, I know that for sure.

It’s also really cool how they have a massive posse of guys riding around with them as well and the music playing in the background is really sick too. They’re just complete badasses basically.