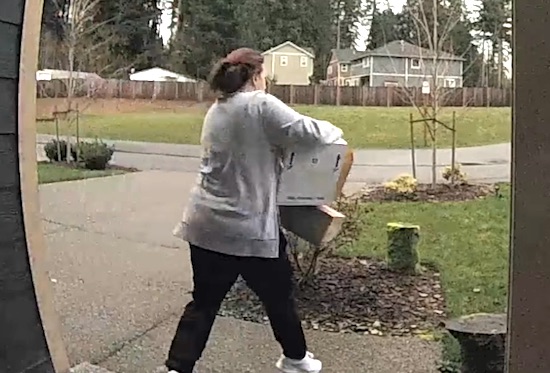 There are a lot of contenders for the worst people on Earth, but right up there near the top have gotta be people who rock up to a house and steal a package from right outside of it, just because it looks kinda big and inviting.

That’s why this video is so excellent, because it sees one of these truly awful people getting their absolute comeuppance as they try to get away with a package that clearly isn’t theirs and in one of the most satisfying ways possible too. The video comes from Bothell, Washington over in the States where a UPS delivery man drops off a package on a front porch, which also has security cameras installed – presumably because their packages get stolen all the time.

Anyway, what happens next is a thing of beauty as the package thief breaks their leg in the most gloriously random way possible as she slips on the wet grass outside the house. Beautiful:

Damn. I’m not really sure how she managed to fall over like that – I’ve watch it a couple of times and it seems really unnatural, although I suppose that’s why her leg is all manked up like that – but I’m so glad that she did screw herself up like that. Just a pity that her accomplice – big guy in the american football jersey – was there to pick up the pieces. Gonna be a long stay in hospital for her anyway though.

For more of the same, check out this hero catching a guy stealing Christmas presents from outside of people’s doors. Asshole.