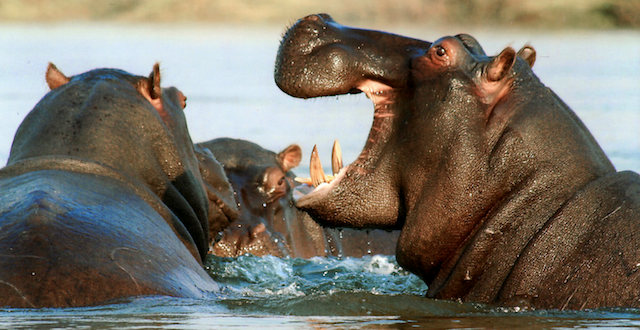 This is a crazy story.

I think it’s fairly well known that Pablo Escobar airlifted some hippos into his private zoo in Colombia, but I don’t think it’s widely known that ever since his death these hippos have been shagging and multiplying and are now posing a significant environmental threat to the population.

There were originally four hippos in Escobar’s zoo but there are now 80 of them and if they continue to reproduce at this rate than there could 1400 by 2039. The problem with that is that hippos aren’t designed to live in South America with their natural habitat being Sub Saharan Africa.

As such, the hippos are poisoning the rivers with their toxic poop and urine and threatening the health of other wildlife and fish in the Magdalena wetlands where they have set up shop. The government are aware that there’s a real crisis going on now and have looked into castrating and culling the hippos, but there’s been a lot of opposition from the public as they’ve become somewhat of a tourist attraction now.

That’s the gist of the situation but this great documentary from VICE goes into a bit more detail about it all:

What a bizarre situation and one that I can’t really see a solution to it that isn’t going to upset some people sadly. Be interesting to see how it all develops.

For more of the same, check out these hippos casually chasing a speed boat. The dudes are major bastards.