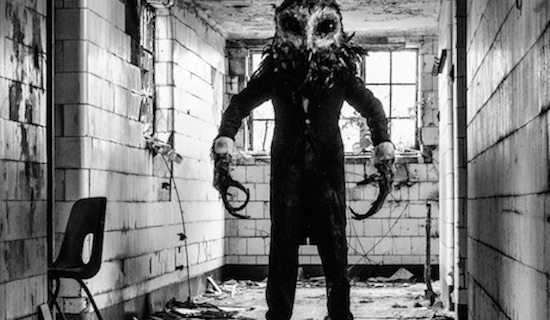 The Owlman originally went viral back in 2014 when the terrifying monstrosity hid out in an abandoned hospital and would jump out at anyone who was foolhardy enough to go exploring in it.

Since then the Owlman has been pretty quiet, but the prank proved so popular that he’s actually going to be the star of his own movie entitled The Black Gloves. In order to celebrate this announcement, the Owlman returned to the site of his original prank and obtained 6 months of footage of him severely traumatising people for the video below:

Ooof – rather them than me. I’m not really sure why so many people are creeping around this abandoned hospital in the first place, but it kinda serves them right. What did they think was going to happen?

That guy breaking down and screaming “get the fuck away, please” has to be my favourite out of all the videos because he just looks so weak and pathetic. I wonder if the filmmakers ever revealed to the guys what the hell was going on, or they’ve just been left traumatised by it all? Kinda hope it’s the latter, even if that is a bit mean hearted.

For more Owlman, check out the original prank here. Still got it.