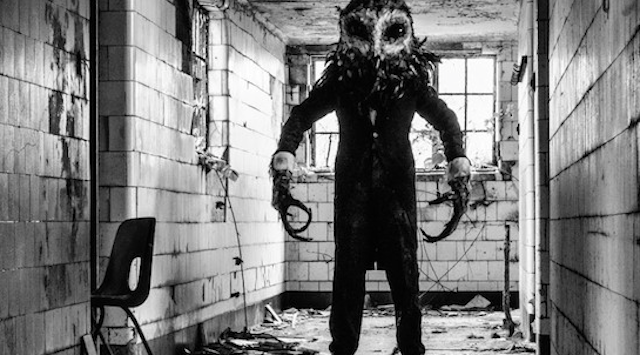 Urban exploring and exploring abandoned buildings always has some sense of creepiness and danger to it because you never know what you’re going to run into around the next corner. Of course normally the scariest thing you’re going to find is some broken glass or something, but it’s still eerie as fuck moping around abandoned places.

These guys decided to play on this fear in the best way possible, by hiding out in St Mary’s abandoned children’s hospital (which I’m assuming is somewhere in Scotland) and waiting for urban explorers to show up and then pranking them with the terrifying owlman, who is some real weird Saw lookalike kinda of monster with giant freaking hands. Imagine running into that fucker when you’re poking around an abandoned building on your own.

As you can see by these reactions, it’s definitely not the kind of thing you want to be happening to you. The second guy – who just sits down and cries and puts his hands over his eyes – might be one of my favourite reactions for a prank ever because it’s so stupid, but it also might make me think this is staged because would anyone ACTUALLY react that way?

I’m not so sure, it just seems kinda like the way some loser would react in a movie and considering this prank is promoting a movie it all seems to fall into place. The movie is called Lord Of Tears and I’ve never heard of it, but after checking out this prank and the trailer (which I’ve included below) I’m tempted to buy it on DVD because it does look genuinely terrifying.

â˜› More Pranks: Friends Convince Man He Was In A Coma For Ten Years