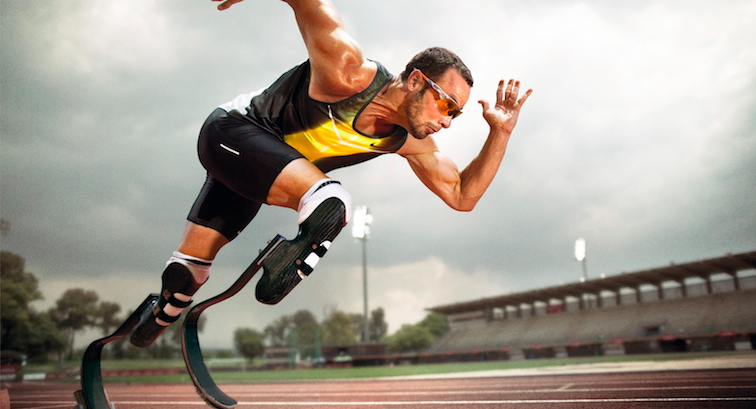 Oscar Pistorius redefines the concept behind Valentine’s Day by shooting his girlfriend in the head.

You probably remember Oscar Pistorius from the Paralympics last year because he was a complete sickhead and also a complete badass and has one of the coolest names in history. You just aren’t going to mess with a guy called Oscar Pistorius, even if he doesn’t have any legs. One of the best parts of the Paralympics was probably when he went on a mad rant at some other guy whose name nobody remembers  who beat him in the 200 metres for having some illegal kind of fake legs that gave him an unfair advantage. It was super badass because he called this guy out pretty much straight after the race when the other dude was celebrating. You just don’t do that kind of shit unless you’re one bad motherfucker. His nickname is Blade Runner too which is also all kinds of cool.

Anyway, everyone had probably pretty much forgot about Oscar Pistorius after Paralympic fever ran down, although he probably made a brief resurgence around the end of the year in some end of year quizzes because he’s the kind of person people would include in that kind of crap. But he’s made the news again today and really highlighted what a ruthless bastard he is, as he shot his girlfriend up a bunch of times over in their house in South Africa. This story broke earlier today and has been developing all through the day which is why we’re only sticking up a post about it now.

Originally there was a lot of speculation that Oscar’s girlfriend was trying to surprise him while he slept, as a special Valentine’s Day surprise or whatever. I guess that’s the kind of thing couples do when they’re dating. Anyway, people thought that Oscar mistook her for an intruder in his house so he emptied a chamber full of bullets into her with the gun that he allegedly kept on his bedside table. That sounds pretty nuts to me, I mean how the hell do you mistake your girlfriend for an intruder and would he really have been so terrified as to have adopted a ‘shoot first, ask questions later’ policy?

I didn’t think so when I first read it and seems like the police have dismissed the theory too (maybe they should have hired me, could have saved them a couple of hours) and accused Oscar Pistorius of murder. Ouch – that definitely isn’t how I wanted to spend Valentine’s Day. Amazingly he’s in court tomorrow to answer the charges which is a pretty quick turnaround, although I guess the trial probably won’t start for a while. Apparently the police had been called to the house a bunch of times previously to answer domestic disturbance calls, so I guess they probably got in some kind of argument and Oscar finally lost his rag – a trait of all badasses – and decided to shoot her. Probably saw Django Unchained last week or something.

Nobody really knows what happened yet though, although Oscar’s father Henke did offer this completely useless statement: ‘I don’t know nothing. It will be extremely obnoxious and rude to speculate. I don’t know the facts. If anyone makes a statement, it will have to be Oscar. He’s sad at the moment.’ He seems to not really realise that he himself is making a statement by saying this, which is kind of funny in a metafiction kinda way.

Oh yeah, and if this didn’t make you think Oscar Pistorius was a badass then check this out:  his girlfriend is a solid 10, a professional model and a few years older than him and – I really hate to highlight this because I’m sure it’s some form of discrimination – had all her limbs. Until Oscar Pistorius blew her brains out, that is. But yeah, I mean of course Oscar Pistorius was a stone cold player, how could he not be, he’s a total badass and they’re always players.

His girlfriend’s name was Reeva Steenkamp and she had tweeted earlier that she was really looking forward to Valentine’s Day. I bet she didn’t see a bullet to the head coming as her surprise gift from her lover huh? If you’re celebrating Valentine’s Day today with your that special girl/guy try not get too vexed with them and blow their brains out, yeah?