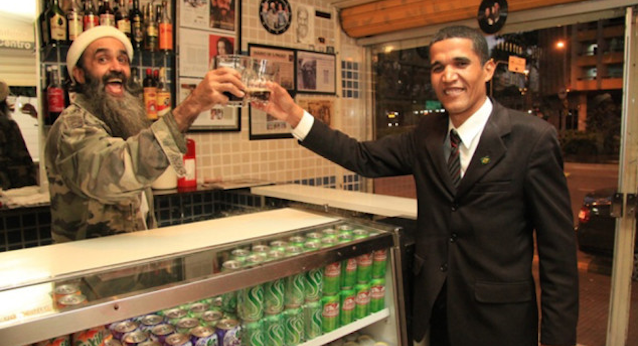 Themed bars are big business, but just what the hell is an Obama bin Laden theme exactly?

The first bar popped up in Sao Paulo and is the brainchild of CearÃ¡ Francisco Helder Braga Fernandes – who for some reason is an (alleged) ‘dead ringer’ for Osama bin Laden and decided to capitalise on his resemblance by opening up an Osama bin Laden themed bar. I mean why not right?

The bar itself doesn’t really seem to have any notable features, other than the fact that is has a bunch of pictures of Fernandes dressed up as bin Laden all over the walls. Fernandes also dresses up like bin Laden every day and sells beers to his customers. Apparently the bar is really popular with the heavy metal and rock crowds in Brazil, probably because it’s really edgy and counterculture just like they are.

The success of the bar has spawned other copycat restaurants in the region with reports that other bars, luncheonettes and restaurants – including a family themed restaurant named Bin Laden And Family. Really fucking weird.