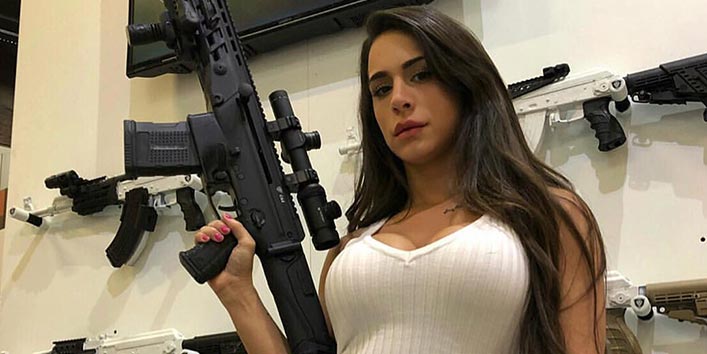 An Israel army vet turned Instagram model has been dubbed the ‘Queen of Guns’ by combining her love for revealing outfits and guns that has seen her rack up 500,000+ Instagram followers.

Orin Julie, 25, spends time equally between Israel and America, and claims America has ‘the best gun laws in the world’. So yeah, sounds like she is a bit of a weapon herself.

The former Israeli Defence Force fighter says she gets ‘huge excitement’ whenever she fires a gun, and has set up ‘Alpha Gun Angels’ to promote women in the international gun community. I think the entire right wing just jizzed themselves!

Just trying to imagine chatting Orin up in a bar and saying the wrong thing to her. She’d probably shoot you in the head before you’ve ever had the chance to say sorry.

I don’t want to say anything else about her that she might find offensive so enjoy another hot/terrifying look at her Instagram:

Speaking of guns, did you see the new trailer for Rambo ‘Last Blood’? He’s nowhere near as sexy as Orin but the film itself looks pretty awesome.