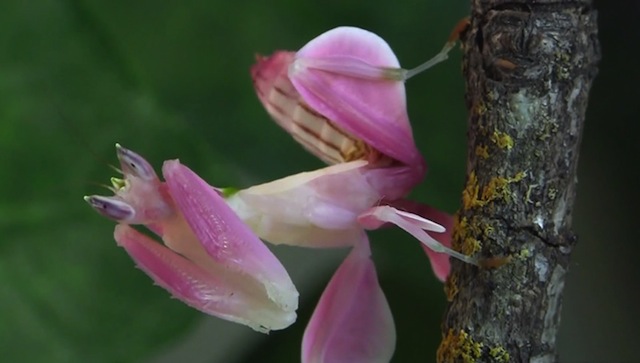 When you looked at that picture you probably thought it was a flower, right? Well, you were duped and it’s actually a praying mantis.

Nature really can be a bitch can’t it? Take the orchid mantis for example. It’s a praying mantis that can camouflage itself to look exactly like a pink orchid. I mean check out the picture above right  – it really isn’t obvious that it’s a praying mantis rather than an orchid is it, and we’re humans, not the bugs that this mantis is gonna catch and eat who think they’re just gonna be landing on a flower and stealing some of its pollen or whatever.

The orchid mantis is found in South East Asia in the Malaysian rainforest, and it can also change colour to brown in order to be perceived as a brown orchid too, depending on its environment. What an absolute killer. Check out a video of it in action below.

â˜› More Disguises: Portraits Of Cosplay Enthusiasts In Their Own Homes