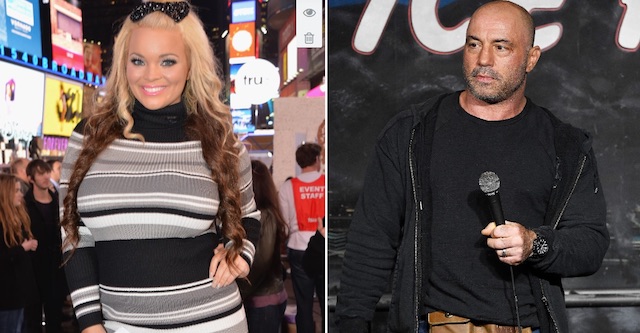 Joe Rogan can be a pretty divisive character at times due to his views on all manner of subjects, but he’s such a powerful figure in the media now that you rarely hear anyone call him out about anything, so it’s funny to hear some OnlyFans model totally rip him after she dissed her body.

Rogan was speaking to Ali Macofsky on the latest episode of his podcast when she drew his attention to OnlyFans model Trisha Paytas and Rogan decided he wanted to pull up some more of her content and take a look at her. That’s when he said the following:

Click on the one of her in a bikini, let’s see how she would look naked…

Yeah, you can keep that.

Oof. Obviously Paytas’ notifications probably went off the charts following that call out, but she didn’t let it get her down and instead decided to issue the following scathing analysis of Joe Rogan and his actions:

Looking at a photo of me in a bikini and going ‘ugh you can keep that,’ why? I have heard that Joe Rogan is highly intelligent, like he’s so smart, he’s so this but honestly, I look at that and I’m just like ‘oh, he has no intellect whatsoever’, he can’t come up with a wittier quip or even just if I’m not your type, you really don’t have to say anything.

You have a guest on saying she appreciates my work and my content – and the hard work that I put out, shout out Ali for acknowledging that… Joe Rogan and the other guy that’s ‘ugh’ing over, I don’t exist for your ejaculation, but I can provide that for other people that like this type.

Not every woman is here to be pleasure for your eyeballs… Just for future reference, for people – attention trolls like myself that aren’t me – you don’t have to ‘urgh’ at somebody. Because chances are, even if they are the most beautiful person, maybe they already ‘urgh’ at themselves.

That’s a very warm and considered response isn’t it, but I doubt that Joe Rogan will even acknowledge it and he almost certainly won’t try and change his behaviour because of it. To be honest, I don’t really think what he said was even that bad, but I suppose we’re all conditioned as a society to react in that way to people with larger bodies and even if it’s just an offhand loose remark like the one Joe made, it can really deeply affect someone and ruin their week/month or even year. Maybe we need to look at this incident and think about that.

As an aside though, it’s kinda funny to hear Paytas say ‘old, unattractive, small dick energy’ but then add ‘not an insult’ at the end so that she’s gets away with dissing them. If you can’t beat them join them I guess.

For more of the same, check out when Joe Rogan interviewed a scientist who worked at Area 51 and confirmed that aliens were real. Spooky.