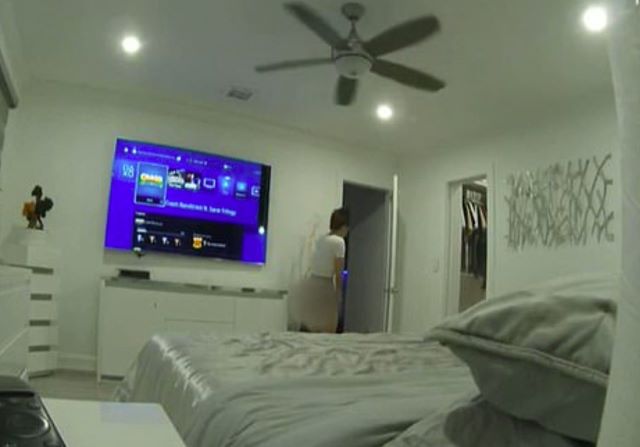 An OnlyFans model/mum wearing nothing but a PJ top and a thong opened fire on two uzi-wielding burglars who smashed their way into her home.

Ansley Pacheco, 26, was caught on home security cameras grabbing her own gun to defend her 7-year-old son in the raid of her home in Miami:

That’s a brave woman right there. Great to see the burglars were caught so off-guard by her actions that they legged it out the house straight after. Pacheco told Local 10 News afterwards:

We don’t (know who they are), but I really hope they get caught.

She said a friend had pulled up to watch the the NBA Finals at her home when the waiting criminals caught him off guard:

While I was in the bathroom, I started to hear the commotion, I started hearing, ‘Get down, get down, give me everything you got. I went to the nightstand; I grabbed the gun and I opened the door. I saw one if they guys face to face with me. He told me to put my gun down. I just shook my head no, and then I said, ‘Don’t shoot me, my son is in here.’

They finally just ran out. My husband ran and got the gun and shot back at the vehicle that was leaving.

What a badass. OK there’s a cynical side to me that thinks this whole thing was staged to boost her OnlyFans/Insta following, but who knows. It is a little convenient that she had her butt on full display, but maybe that was just good/bad timing.

If the footage is real, then that must’ve been a terrifying experience for her family to go through. Why not make them feel better by giving Ansley a follow on Instagram:

For the armed robber who was forced to buy a cheeseburger at a McDonald’s in Coventry to get the till open, click HERE. Not very well planned.