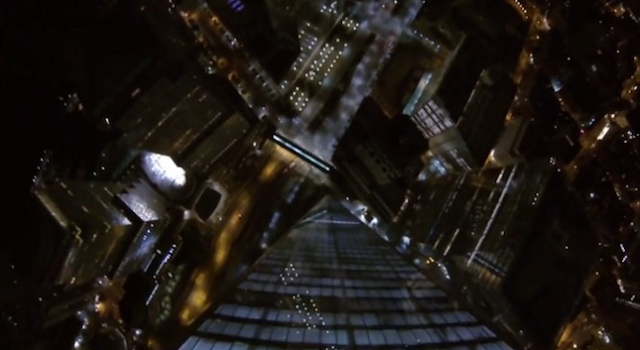 Eat your heart out Mustang Wanted.

On Monday, a group of four men who broke into the 1 World Trade Centre in September and BASE jumped off the top of it (three of them BASE jumping, the fourth keeping watch) turned themselves into police and the footage was released onto the internet. It looks fucking awesome.

The men said they performed the stunt to test the level of security in the building as they were concerned that it wasn’t up to scratch and this could lead to a repeat of 9/11. Andrew Rossing – one of the men – said that they just kind of walked in and nobody even questioned them or tried to stop them as they made their way up the 104 floors of the 1WTC.

They also said they didn’t even see one security guard on the way up and it was ridiculously easy to evade capture. A security guard at nearby Goldman Sachs didn’t even try and do anything, even though he clearly saw them stuffing parachutes into their bags at 3:00 am. I guess not all security guards are the sharpest knife in the drawer. It took police until January before they were able to identify the men and obtain warrants for their arrests, which is how they found the camera footage. The men at first were in hiding but decided to turn themselves in on Monday.

They’re expected to be charged with trespassing and burglary. They claim that they entered the site through a hole in the fence, although the Port Authority claim that they were able to access the site because one of the men worked for a construction company that was present there. Rossing and his friends claim that they’re doing this to avoid blame and again highlights the need for tighter security at the building to prevent the possibility of terrorism: ‘It’s supposed to be the most secure building in the world. God forbid it was somebody else getting in there with a real intention to harm New Yorkers.’