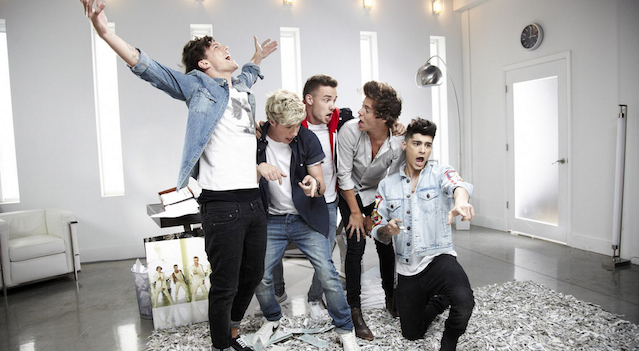 if you’ve heard One Direction’s new song ‘Best Song Ever’ you might think it sounds a bit like The Who’s ‘Baba O’ Riley but One Direction fans aren’t happy about The Who trying to get it taken down because of this.

Another day, another embarrassing reaction from One Direction fans on Twitter and yeah you might say ‘who cares?’ or ‘WAH WAH WAH Sick Chirpse UR Worse dan Heat Mag’ but I’m not gonna lie – we love laughing at these retards and it seems like most of you people do too.

The story starts with the new One Direction song entitled ‘Best Song Ever’ which isn’t an arrogant title for a song at all huh? I’m guessing you probably haven’t heard it yet so I’ve embedded it below for you to check out. You probably only need to listen to the first 30 seconds or something for the relevance to this article, so maybe turn it off after that if you’re not that into it. I don’t think it’s one of One Direction’s best songs by any means. The song doesn’t actually start until around 2:30 because they’ve decided to put some ‘comedy’ in before it in the video so maybe skip all that too.

Now, those of you who know something about the history of popular music might think that the opening to the song sounds A LOT like The Who’s classic hit Baba O Riley. Like, A LOT like it. Like, pretty much exactly the same, you know? Not convinced? Check it out below:

Of course, when Best Song Ever dropped a bunch of people with nothing better to do than to get into pointless arguments with Directioners over Twitter decided to point this out and the two sides got into a pretty heated conflict about the whole thing as you can imagine. It was even rumoured that The Who had actually found out about Best Song Ever and were so outraged by its existence that they wanted it deleted. OMG.

I don’t know how the hell this rumour even got started or how people thought it could even be true – Baba O Riley gets ripped off ALL THE TIME and how the hell would you even delete a song in the modern age with mp3s and the internet etc – but predictably One Direction fans went into meltdown mode about this and posted some very funny tweets, the best of which you can see below.

A spokesman for One Direction – who is actually one of their producers Julian Bunetta (come on, you didn’t think that One Direction had the idea to rip off one of the most famous songs in history all by themselves did you?) offered the following statement regarding the situation:

‘It starts with a synth and ‘Baba O’Riley’ starts with a synth. I mean that’s a huge compliment because if that can evoke that same excitement then that’s amazing but that was not the… we weren’t saying, ‘OK, let’s rip off Baba O’Riley. At a certain point we recognised it had the same type of intro where there’s a synth and a piano, but we really tried to make sure that there was no intellectual property stolen or anything like that.”

So basically you did rip it off but just changed it slightly so you wouldn’t get sued. Great statement guy. Anyway, check out all these dumb tweets below, I’m sure you’ll agree with me that it’s really great that the Beliebers had the Directioners’ backs on this one. Vomit.

Are Harry Styles And Nick Grimshaw In A Sexual Relationship?

Harry Styles Follows Girl On Twitter, She Has A Meltdown

Harry Styles Has An Imposter

But Niall is a fan of The Who, so he's probably really upset that they wanna take down BSE 🙁 #donttouchbestsongever pic.twitter.com/ZdXGzasPGO

The Who is trying to get BSE removed from YouTube
The who
Exactly #DontTouchBestSongEver #mtvhottest One Direction pic.twitter.com/dDf7jPAqqy

Even the Urban Dictionary knows better than to mess with Directioners. #DontTouchBestSongEver pic.twitter.com/hd5gGdGmMs

Who the hell is 'The Who' #DontTouchBestSongEver

"The Who want to get rid of Best Song Ever because it sounds similar to one of their song." #DontTouchBestSongEver pic.twitter.com/vpZzp0Mlcn

We worked so hard for this song. Don't delete it!!! #donttouchbestsongever pic.twitter.com/eQDHnzPeob

#DontTouchBestSongEver don't even think of touching it !!! You don't wanna mess with us !! pic.twitter.com/Bu3ph1tNK9