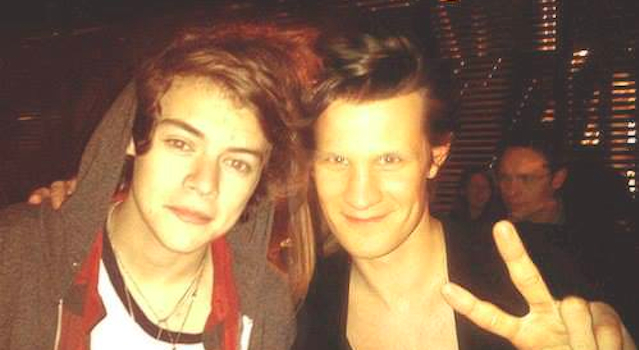 Even though it’s 2013 the BBC can’t figure out how to effectively interview people on the other side of the world, so what we got instead was this absolute screw up that is completely embarrassing.

If you’ve even gone near the internet or a television this weekend then you were probably aware that on Saturday it was the 50th anniversary of Doctor Who and that it was also 1D day, which was something to do with One Direction celebrating being One Direction.

For three minutes on Saturday night following the screening of the 50th anniversary episode of Doctor Who, the two events crossed over when One Direction joined the Doctor Who after party on BBC Three and interviewed some of the Doctor Who cast with their own questions. The only problem was that even though this is 2013 for some reason there’s still a delay on the satellite linkup between One Direction – who were in Los Angeles, naturally – and the studio and nobody involved with the show seemed to be able to deal with this, despite the fact they knew it was going to happen.

So instead of a cheery interview with the guys from One Direction, you get a complete and utter mess of an interview with people repeating themselves over and over again on a live feed and One Direction unfortunately/fortunately being completely talked over so you can’t hear any of their opinions on Doctor Who. Obviously this might have been a blessing in disguise but the fact is it’s pretty embarrassing that the BBC can’t hold a successful live broadcast and can’t figure out how to conduct an interview with people on the other side of the world.

Keep watching it all the way to the end because it just gets more and more cringeworthy as it progresses. It’s also really funny seeing One Direction looking really happy and enthusiastic but not being able to hear what they’re saying and just hearing Zoe Ball’s question repeated over and over again on the speakers. It actually makes your head hurt towards the end it’s so confusing.