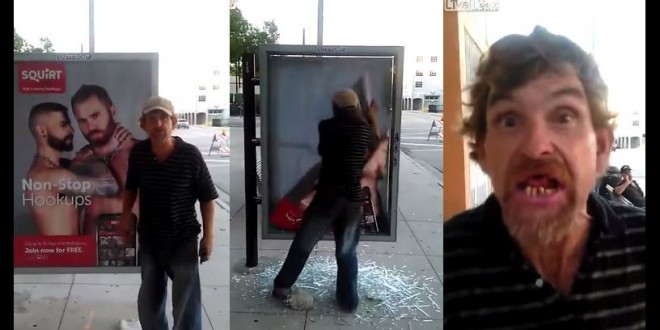 Reckon this guy has a problem with gay people?

Some people just aren’t about that LGBT-acceptance, no matter how far the rest of the world has come in that regard. You probably won’t be surprised to hear that one of those people is this bum who claims to have nine children and to have served in the Marine Corps, and therefore believes it’s his right that he doesn’t “have to put up with that shit”.

“That shit” being an advert for gay hook-up site Squirt.org (lol) at the bus stop:

Funny thing is this video is going viral on Liveleak, which means this guy’s just basically given Squirt.org a bunch of extra publicity by smashing up their ad. Not to mention all the homophobes out there who are undercover homosexuals themselves and are going to big up this guy for what he did and then sneakily sign up to Squirt when no one’s looking.

P.S. “Not right now — we’re drinking!” — Erm pretty sure smashing things up with rocks in public is something that’s best done while drunk. Nowhere near as fun otherwise.