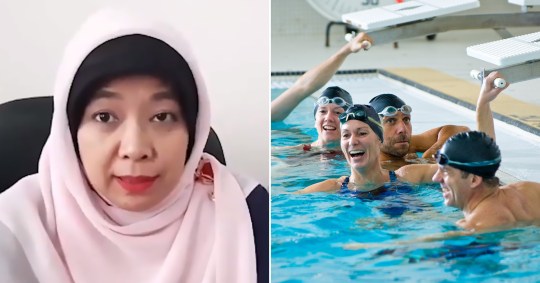 How about that old myth that women can get pregnant from sperm that’s floating around in swimming pools? Surely that can’t be real can it?

Firstly, you would like to think that guys weren’t actually out there jerking off into swimming pools because it’s one thing pissing in a pool – which is also rank – but another thing entirely cracking one out and leaving a glob of semen in there. Surely there aren’t that many people doing that, even if we know tragically that there are definitely a few perverts out there who are probably doing this on the reg.

I never thought that it would be possible for some sperm to actually manage to swim up your vagina and impregnate you if you did find yourself in the unfortunate situation of swimming around in someone’s semen because well, it seems ridiculous doesn’t it? This isn’t the view of child protection officer Sitti Hikmawatty though, who said the following during an eight minute interview over in Indonesia:

An especially strong type of male sperm could cause pregnancy even without penetration because no one knows for sure how men react to the sight of women in a swimming pool.

I mean even the way she phrased that sounds stupid, although I do appreciate that it could be lost in translation. Does that really have any basis in scientific fact?

Well in a word, no. She’s been roundly criticised by Indonesian health officials and doctors who have called for her to resign for her ridiculous comments with the executive of the Indonesian Doctors Association saying the following:

It would be impossible for a woman to become pregnant in a swimming pool.

The water in swimming pools contain chlorine and other chemicals.

Hardly any guys are going to ejaculate in a swimming pool either.

Yeah I was thinking about that too as a factor. Just seems so preposterous that anyone could think this, but then I guess we’re not all Sitti Hikmawatty are we?

For what it’s worth, she has apologised for her comments but I imagine that the damage in her home country has been done and she’ll always be remembered as the idiot that thought that people could get pregnant from swimming around in other people’s sperm. Doubt there’s much coming back from that.

For more of the same, check out this 56 year old man throwing his semen over a woman in Asda car park. Doubt she got pregnant either.