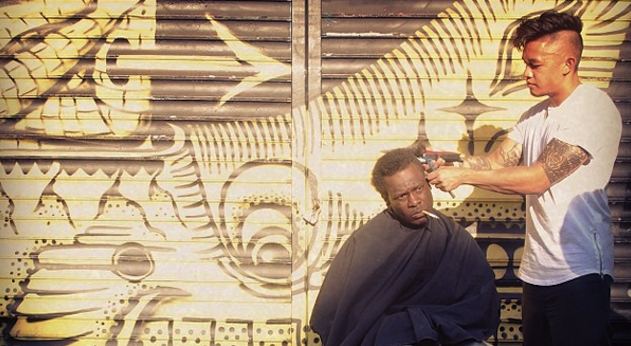 Whilst most of my Sundays are spent hungover in bed, struggling to eat greasy burgers or watching football matches, this New York City hairdresser named Mark Bustos uses his day off to go around New York City giving homeless people free haircuts. He’s also performed similar acts on recent trips to Costa Rica, LA and Jamiaca. What an absolute gentleman. He’s also giving them awesome haircuts, and not anything as bad as these monstrosities.

Although of course he records all his efforts on his Instagram account which is perhaps a slightly cynical way for him and his hairdressing salon There Square Studios to get famous via a viral marketing campaign, when it’s helping people out as much as this then you can’t really grumble about it. The homeless on his Instagram people look genuinely grateful and awesomely fresh upon receiving their haircuts too, so there’s no doubt that it really does help people out.

Mark himself does seem like a genuinely good dude too – he performs up to six expensive haircuts every Sunday right on the street where he finds his clients, in the hopes that passersby will see what he’s doing, get curious and pass on a good deed to someone else. He even apparently lives by the motto ‘Be Awesome To Somebody Today’.

Try and do it yourself today.