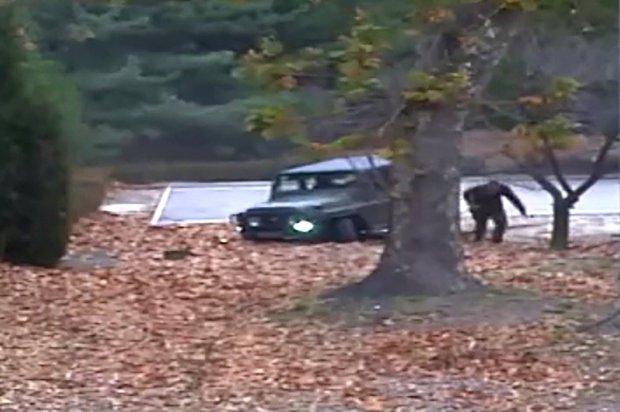 We’re all too aware of the brutalities of Kim Jong-Un’s regime over in North Korea thanks to the numerous leaked stories that have come out of the country, but it’s always shocking to see a video like this out there in the flesh.

The video shows a North Korean soldier racing towards the border in a vehicle, before exiting to eventually cross the border on foot. During the last section of his escape, he is shot five times by North Korean guards and probably wouldn’t have made it across had some South Koreans from the other side not run over and literally dragged him across the border.

Check out the distressing footage below, which is actually pretty dramatic as it’s about six minutes long and covers a lot of him driving in a jeep too. You might wanna put some getaway music on to speed it up though, especially as you know that he manages to get away:

Damn. What a lucky escape for that guy, although it really does highlight just how brutal and unforgiving the establishment over there is, as if we didn’t know.

The story of the unknown soldier has captivated South Korea since the escape last Monday, especially as the soldier has subsequently recovered fairly slowly after a few surgeries in hospital over in S. Korea. Rather disgustingly, they also removed several parasites and roundworms from the soldier – some as long as 27cm – which are probably indicative of poor nutrition within the military. Gross.

There’s also concerns that the North Koreans violated the armistice agreement ending the 1950-53 Korean War because they fired across the border and trespassed over it in order to try and recapture the defector. That’s the first time shots have been fired in the area for three decades. Watch this space to see how that pans out.

For more North Korean brutality, check out their interrogation techniques. Not something you want to be involved in.