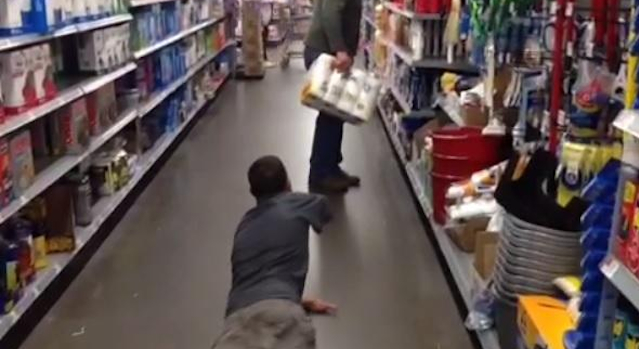 If you’ve got no legs anyway, you might as well pretend to be a zombie and scare the shit out of people, right?

If you had no legs and only one arm would you whine about it, or would you turn it into something awesome like this guy, whose videos are currently going mega viral on the Internet.

His name is Nick Santonastasso and he was born with a rare condition called Hanhart Syndrome, which means he was born with three limbs. Hanhart syndrome can also lead to a bunch of other symptoms too, including an incompletely developed tongue, malformed arms and/or legs and an extremely small jaw. It is not yet known what causes it.

Nick doesn’t seem to be letting it get him down though as he puts on full zombie makeup and scares the absolute shit out of people hanging out shopping at an unsuspecting hardware store in one of the funniest pranks ever. People in America loved the prank so much that ‘zombie scare’ – the name of the video – became the second trending topic on Twitter and people started petitioning Robert Kirkman (the executive producer) to give Nick a role on The Walking Dead, which is incidentally his dream job.

If you like the video, give Kirkman a tweet and try to make Nick’s dreams come true. Tell him that Sick Chirpse sent you too.