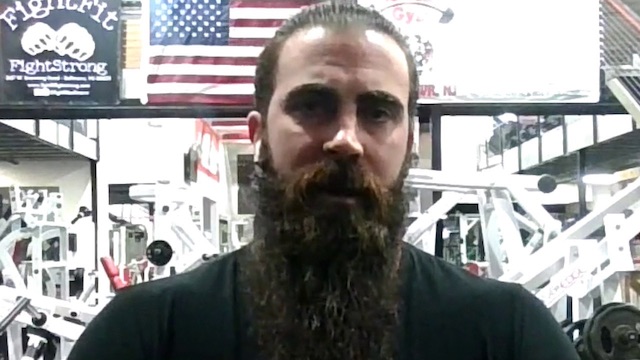 London and a bunch of other places in the South East will plunge into Tier 3 from tonight, but over in America some of the rules have been this level of annoying for some time now and one gym owner has had enough, refusing to close throughout multiple lockdowns and obtaining quite the following because of his choice to take a stand.

Ian Smith is the owner of Atilis Gym in Bellmawr, New Jersey and is a fervent anti-masker, claiming that the evidence he has seen (on someone’s Facebook page) doesn’t mandate their effectiveness. The governor of New Jersey recently demanded that all gyms in his state close and obviously Smith took exception to that as well, saying that 83,000 people had frequented his gym since the pandemic began and not one single case has been linked to it.

Not sure how accurate either of those claims are, but Smith then made a ‘Love Actually’ style video – that’s what other people are calling it, not me – that since went viral so I guess he’s doing something right:

Anti-masker in New Jersey refuses to enforce COVID guidelines at his gym pic.twitter.com/zu69lCsvQq

Very nice, although the problem Smith is facing now is that his gym is facing $1.2 million in fines, $15,497 for every day he’s been open. Fortunately, thanks to the viral nature of his video, he’s managed to raise $350,000 from over 7500 donors to help him out with that. At least people stick together on these issues hey? No science, no shutdown.

Unfortunately for Smith though, the viral nature of his video has meant that people have looked into his history and discovered that he killed 19 year old Kevin Ade whilst drunk driving back in 2007. Marijuana and hypodermic needles were also found in his car and he served five years in prison after pleading guilty to second degree vehicular homicide.

Smith at least tried to explain/justify this with the following Instagram post, but I’m not sure if anyone is buying it:

Yeah, that was a twist in the anti masking stories out there that I didn’t really see coming, it’s like something out of an episode of ‘Desperate Housewives’ or something. Who’s side should we be on here after that heartfelt and heartbreaking monologue from Smith?

Members of Ade’s family have all condemned Smith’s latest actions, saying that it just paints him as someone who doesn’t follow laws and is an irresponsible member of society and you can argue that they’ve got a pretty good point there. Seems like the division on this issue issn’t ever going to be resolved though.

For more of the same, check out this insane anti mask meltdown from Walmart in Alaska. That one really is something.