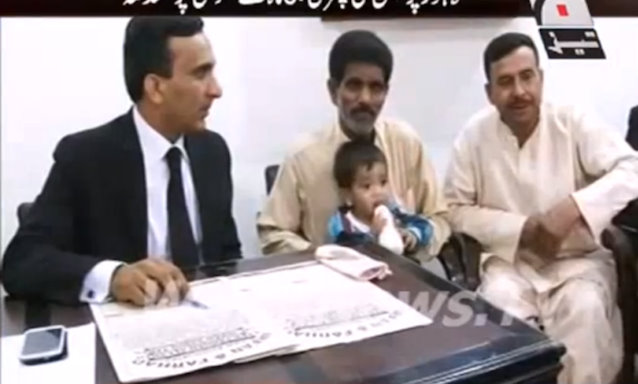 A 9 month old baby has appeared in court in Pakistan on charges of conspiring to murder, threatening police and throwing stones at them.

A 9 month old baby has appeared in court in Pakistan on charges of conspiring to murder. Little Muhammad Mosa Khan also faces accusations of threatening police, throwing rocks at them, and interfering in state affairs, despite the fact he is 9 months old and can barely walk or talk and has yet to develop the self-awareness necessary to do any of the things they’re accusing him of.

The kid — who will surely face manslaughter and not murder charges if found guilty — is one of more than 30 people police are investigating after a protest over electricity shortages turned sour and resulted in mobs throwing rocks at cops with “intent to kill”.

Here’s a video of him getting his fingerprints taken while he sucks on a milk bottle:

The boy has been bailed until April 12 as the chief minister of the Punjab province looks into it.

â˜› Watch Next: This Baby Goat Vine Is The Funniest Thing You’ll Watch All Day