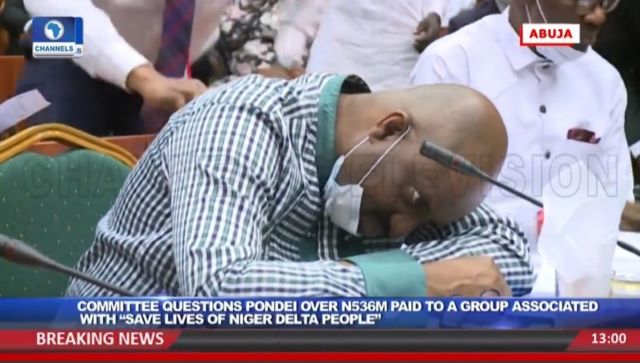 A hilarious clip of a Nigerian official fake fainting after being questioned over a missing 536 million nairas (about £1M) has gone viral.

Prof. Kemebradikumo Pondei, the acting managing director for the Niger Delta Development Commission (NDDC), wasn’t expecting to be quizzed about the N536 million paid to a group associated with the humanitarian organisation “Save Lives Of Niger Delta People”. When asked by the speaker if he could explain the whereabouts of the funds, he came up with a genius solution to escape the situation and bide himself some time – pretending to die/faint in front of everyone:

A Nigerian official fake fainted after he was grilled about missing funds. pic.twitter.com/l8kFfmmM3O

Lol. I don’t know what kind of CPR was being attempted there but I guess they had to make sure the guy was OK, even if it was blatantly obvious what he was up to. Dude was completely taken by surprise and put on the spot! His world had turned into a real life Mr Krabs meme: And so he did what any man looking for a way out would do in that situation – feigned a medical emergency that rendered him incapable of answering any questions. Well to be fair I’m not sure many of us would think of something so ingeniously pathetic in the heat of the moment, but at the end of the day, it worked! The man’s a genius!

The best part is that Pondei later spoke from his hospital bed to call out anyone who thought he was faking it:

“I had an unexplained, unexpected health challenge. It is ridiculous to think that people believed I was acting. I would not pray for anyone to experience what I went through.”

OK then. Now about that missing 536 million…?

For the east London restaurant owner who was fined for saying mouldy chicken was ‘Nigerian crab meat’, click HERE.