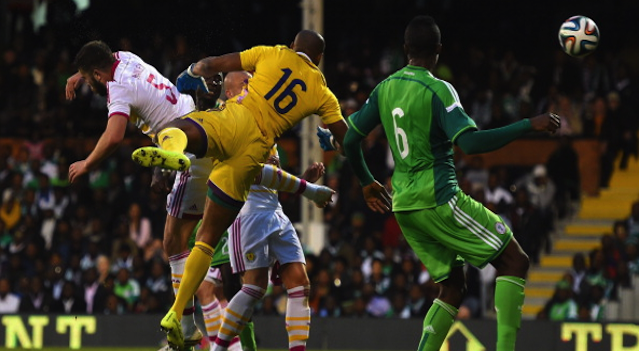 There were rumours going around about match fixing before yesterday’s game between Nigeria and Scotland, but what actually happened was ridiculous.

If any of you were following the buildup to the Nigeria V Scotland match last night (lol wut, who would care about that when the World Cup is starting in a couple of weeks), then you would have known that there were A LOT of rumours going around that the match was going to be fixed and that Nigeria were going to take a dive in it.

With that in mind, it probably wasn’t the best idea for the Nigeria keeper Austin Ejide to catch the ball following a corner and then rather blatantly throw it into his own net in a completely blatant way. He isn’t even under any real pressure after he’s caught it and there’s absolutely no way he would have had to move his hands like that in order to do it, which makes the whole thing the most suspicious thing ever.

Fortunately that goal was chalked off for ‘infringement’ (yeah right) but the second Scottish goal was pretty dodgy too, with the two Nigerian defenders being guilty of not exactly clearing the ball effectively before one of them eventually put it into his own net, albeit more convincingly then Ejide’s attempt.

â˜› More Own Goals: Dumbest Own Goal In History