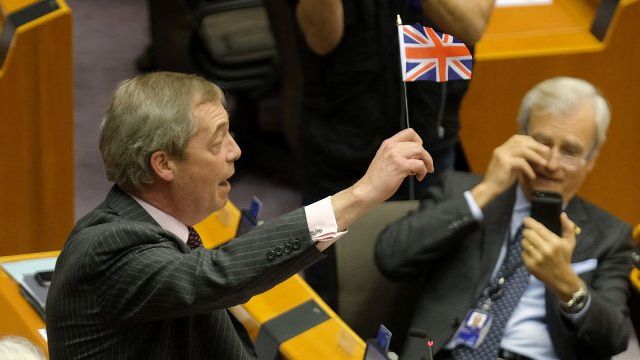 What a way to leave the EU.

Brexit seems to be finally happening tomorrow when the clock – not Big Ben remember – chimes midnight tomorrow night and obviously everyone that voted Leave is going to be absolutely ecstatic about this, with several Brexit parties scheduled all over the country.

Nigel Farage is probably going to be the happiest of these people though, given all the campaigning that he’s done for the movement during most of his adult life. Never one to mince his words, Farage decided to address the European Union last night in his final appearance there, basically to brag about how he had beaten them and call them all dickheads, before waving a mini Union Jack around  in what can only be described as an act of extreme pettiness.

Unfortunately for him, this meant that he was cut off and told to leave by First Vice-President of the European Parliament Mairead McGuinness in scenes that are more reminiscent of the WWE than European politics:

Britain is too big to bully. We’re off! pic.twitter.com/cBfycWfsN7

Lol. Well, not really sure whether to laugh or cry really. I’m sure the majority of people who voted Leave – and maybe some of those who didn’t – will probably love Farage’s antics, but there’s something to be said about leaving with your head held high and a bit of dignity.

Are the European Union and European countries really going to want to deal with us in the spirit of co-operation when we’ve acted as twattishly as this? Guess we’ll have to wait and see and hope it all works out.

For more of the same, check out this Remainer who wants to draw swastikas on a 50p coin. What a dickhead.