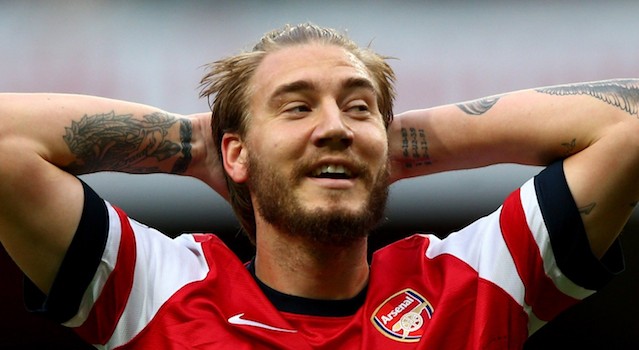 How to deal with not being in Arsenal’s Champion’s League squad: get wasted and embarrass yourself.

This is definitely not the way to react to not being picked for your side’s Champion’s League squad and probably isn’t going to do Nicklas Bendtner any favours when it comes time to look for another club in the summer.

It’s being reported over in Denmark that Nicklas got completely trashed on Tuesday night in Norrebro in Copenhagen, threatening a taxi driver and rubbing his dick all over his taxi. He then screamed at the taxi driver that he was a little bitch and he would fuck him, whilst whipping the taxi with the belt from his trousers. Classy.

The taxi driver said that he had had drunk customers in his taxi for 25 years but had never, ever seen anything like the way Bendtner behaved on Tuesday night. I guess this makes sense, because Bendtner always aims to be exceptional and different and number one at everything he does.

To be honest though I think that the joke’s on Arsene Wenger – if Bendtner had been in the squad against Bayern Munich then surely Arsenal would have won. I mean he is that good right? At least that’s what he tells us.

Spokesmen for both Arsenal and Bendtner declined to comment on the incident.