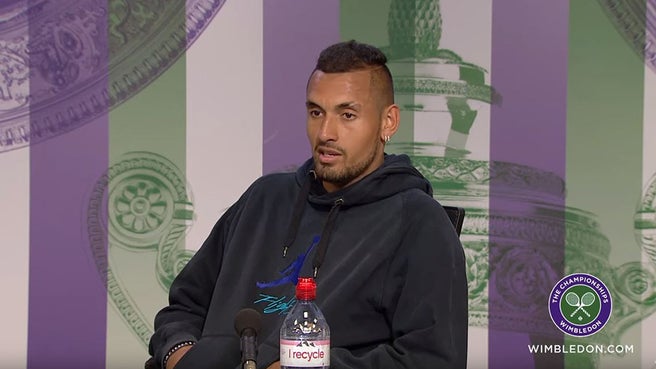 We’ve written about Greek-Australian tennis player Nick Kyrgios a few times already on Sick Chirpse, and it looks like he’s still the biggest dickhead in tennis following his antics the other day.

Having been beaten 6-3 3-6 7-6 7-6 at Wimbledon by Rafael Nadal, Nick showed up for the obligatory post-match press conference and absolutely roasted a reporter who asked him about drinking at a pub the night before the game:

Here’s a clip of me getting comprehensively owned by Nick Kyrgios pic.twitter.com/x3ZyPUEfag

Fair play to the reporter for uploading that clip and admitting he got owned, but you just cannot come back from a diss like that. He probably went back to his hotel room and cried into his pillow all night. Right afterwards Nick clocked a familiar face from the night before:

Many don’t but I love Nick Kyrgiospic.twitter.com/Q19s9QKc5m

Perfect, just perfect. She really thought he wouldn’t notice/remember her from the night before.

As you might expect most tennis critics and old school purists don’t like Nick Kyrgios very much, but I reckon it’s pretty refreshing having a controversial, unpredictable figure in the sport for once. Watching any sport instantly becomes more interesting when the athletes can get you talking about them outside of the actual sport.

During the game itself, he even busted out this insanely disrespectful underhand serve. Nadal must have been fuming:

Kyrgios with the underhand ace vs. Nadal 😲#Wimbledon pic.twitter.com/mP8emlDJqm

Thought not as fuming as when Kyrgios actually smashed the tennis ball into him at full pelt. Wow:

Meanwhile in #Wimbledon…#Kyrgios tries to hit #Nadal. And succeeds. pic.twitter.com/7YjKFN2QBl

Kyrgios was asked about the incident during the press conference, and wouldn’t you know it, didn’t offer an apology:

Fair play. It is within the rules of the game even though it’s an ultimately disrespectful dick move in a sport that historically celebrates decorum and respect between players. Time will tell whether Kyrgios is good enough to ever win a grand slam, but at least we know he’ll always be entertaining if he keeps up this sort of behaviour.

For the time Kyrgios got fined $17,500 for simulating a sex act with his water bottle, click HERE.