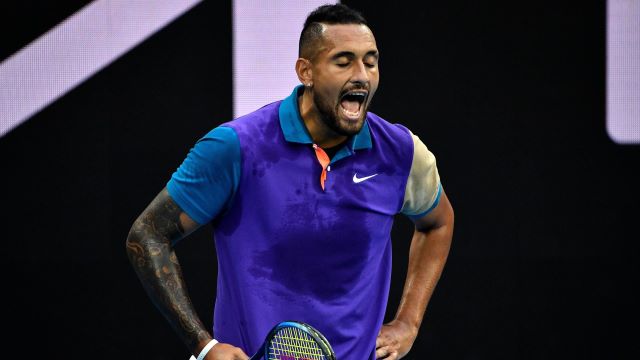 The bad boy of tennis is BACK.

The Aussie Open kicked off in Melbourne the other night, with everyone’s favourite tennis bad boy Nick Kyrgios taking on Frederico Ferreira Silva in the first round.

Having got off to a shaky start, Kyrgios threw a spanner into the works by suddenly demanding that his brother’s girlfriend be removed from the player’s box and out of his sight. WTF?

Someone is in Kyrgios’ box that shouldn’t be. #AusOpenpic.twitter.com/icD4iXZtNh

I don’t know whose girlfriend is in Nick Kyrgios’ box – but he is NOT happy about it. 😬

Amazingly, the tide turned from there and Kyrgios ended up clinching the win. Not bad going for someone who has openly admitted that he hates tennis and only plays it for the money.

Does he hate his brother’s girlfriend too? Well after the match he insisted to reporters that he wasn’t referring to her, even though it seemed that way to everyone in attendance:

Mate, I’m a nutcase when I’m on court. It was just heat of the battle type stuff. It was just being out there, all those emotions again, you outlet into people you know have your back and you know that’s not going to change.

A lot of people can relate to outbursting, you know, you just need to verbalise it and lash out on someone sometimes and then I calm down and start playing some decent tennis.

Well whoever he was talking to, it’s just funny to think that he got so triggered over someone cheering him on who he doesn’t like, and ended up winning the match after getting her out of the players’ box. Like he says – sometimes you just need to lash out and have a little outburst to get your head back in the game. Seems to have worked wonders for him in this case. Let’s hope Nick Kyrgios does well in this competition because tennis is an infinitely more entertaining sport with him in it.

Here’s a clip of me getting comprehensively owned by Nick Kyrgios pic.twitter.com/x3ZyPUEfag

For the time tennis player Stefanos Tsisipas hit his dad with a tennis racket and then got told off by his mum on live TV, click HERE.