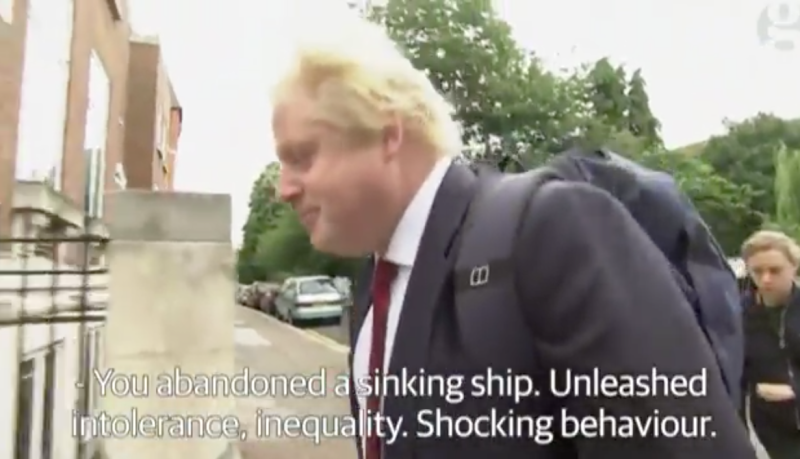 Both Boris Johnson and Nigel Farage have stepped aside from their roles in leadership this week, essentially spearheading the Brexit campaign and getting what they wanted and immediately stepping aside so it’s now somebody else’s problem to deal with.

As such, it seems unlikely that Boris Johnson will ever be able to go anywhere again in the near future without being heckled by people akin to the video that we can see below. In  it, he’s leaving his house when a bunch of reporters try to follow him and tell him off about his actions in an excruciatingly polite manner, using phrases like ‘rubbish,’ an ‘absolute disgrace,’ ’shocking behaviour’ and  ‘you’re a massive child.

Hmm. I mean whilst on the one hand it’s good that these reporters are calling Boris out on his actions, on the other it’s kind of pathetic that they have to do it so politely. I suppose they’re representing news publications though so you can’t exactly go in their swearing and shouting and making a scene, it’s just a shame that the alternative looks so lame.

I’m sure a video of people shouting and moaning at Boris Johnson will be doing the rounds fairly shortly though. In the meantime, here’s Boris Johnson dangling off the end of a zipline. Never forget.