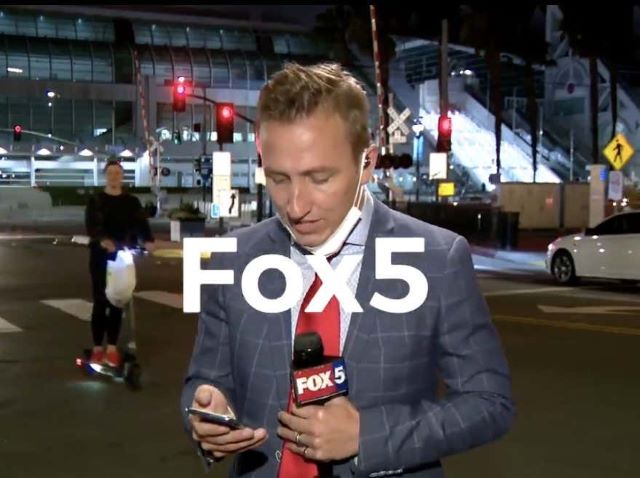 A San Diego news reporter with balls of steel remained cool as a cucumber when a police shootout broke out behind him on live TV this week.

Jeff McAdam was reporting from outside the San Diego Convention Center for FOX 5 San Diego at around 7pm on Monday when shots suddenly rang out in the background:

Officer-involved shooting in the middle of my live report. Full story and footage on @fox5sandiego at 10 pic.twitter.com/aHZNpOBn17

Police confirm gunshots were exchanged between suspect and officer. Thankfully, no one injured @fox5sandiego

Ron Burgundy would be proud. That’s how you deliver a damn news report! No panic, no gimmick, no sensationalism – just giving you the news while attempting to ignore the interruption of a gun fight in the background. He legitimately looked more annoyed about being interrupted than he was worried about catching a stray bullet. It even looked like he was about to ask them to keep the noise down at one point.

Clearly a shootout in the dark San Diego streets isn’t going to stop Jeff McAdam from reporting on the economic impact of another cancelled ComicCon event. Big up the cameraman as well. Managed to keep McAdam in frame nearly the entire time while also checking for imminent danger when he had to. A true news crew right there.

To watch a CNN reporter with ball of steel confront one of Vladimir Putin’s henchmen at his home address in Russia, click HERE. Does she have a death wish or something?