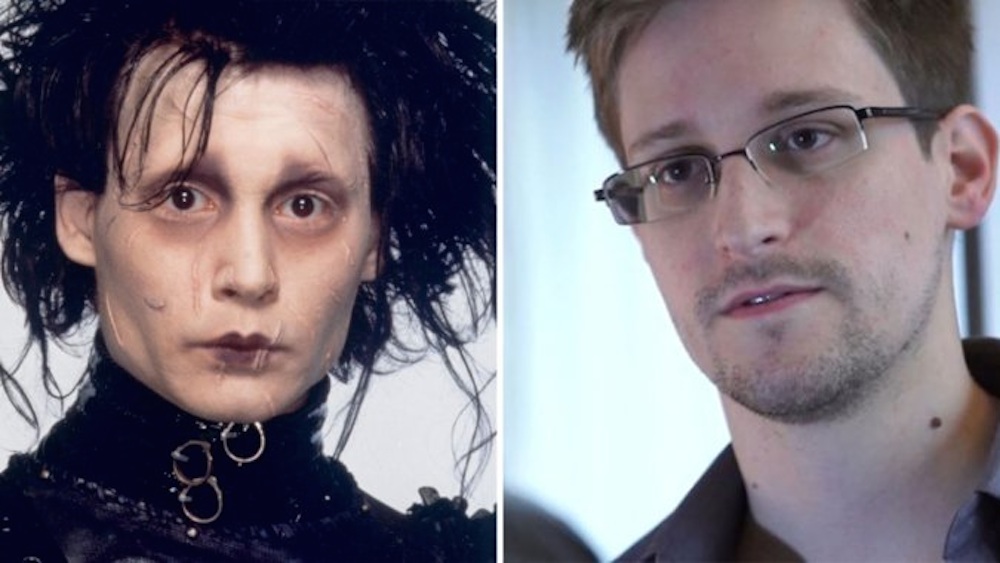 It’s easy to get the two confused.

Over on American cable news, it’s apparently pretty easy to randomly get picked as an ‘expert’ on a certain field, just because the network needs somebody to come on and give their opinion about something that’s going down. Hell, it’s kind of easy for that to happen over here too as random Sick Chirpse employees appearances on Channel 4 News and Sky News can attest.

However, we haven’t seen someone troll the newsstation interviewing them as hard as this guy (why didn’t we think of that?) for some time. His name is John Hendren and he’s Twitter famous for running the account @fart. For some reason he got invited onto HLN to talk about Edward Snowden.

Halfway through the segment he starts talking about Edward Scissorhands instead of our protagonist which is just something else really. The best part about it though is probably that the host Yasmin Vossoughian doesn’t even react to it, and just continues with her line of questioning like his responses are perfectly valid and normal. When you hear what he’s saying though, his responses are anything but perfectly valid and normal.

He actually seems to be visibly ruffled that the host isn’t reacting to his baiting at all, which must have been quite disappointing to him to be fair. Really bizarre TV.

But anyway, what the hell is that host doing, seriously, is she even listening to what he’s saying? Is that all it takes to be a news anchor these days?

Like I said, bizarre and a really good trolling, although perhaps not as good as when Edward Snowden himself absolutely murked a bunch of journalists.

Our friends over at VICE caught up with John Hendren to get his thoughts on the matter:

VICE: How did you end up on HLN?
Jon Hendren: No clue. I got an email last night asking me to Skype in and comment. I said yes immediately (It turns out there’s another Jon Hendren who’s actually an Al Jazeera English correspondent and probably would have something useful to say about all this).

Did you come into the interview ready to talk about Edward Scissorhands or was that a “game-time decision”?
That idea came up pretty quickly after I got the email. I tend to get the two confused anyway.

One of the funniest parts of the clip is that the host doesn’t seem to understand what’s going on, she just sort of steamrolls over you as if you were still talking about Snowden. Do you think she realized what you were doing?
That’s what I don’t get. I expected to be cut off as soon as I mentioned scissors for hands or whatever, but she kept talking to me? I couldn’t see anything on my end of the Skype call so I had no clue how it looked or what her reaction would be, so I just kept talking.

Edward Snowden helped expose that the government was spying on its citizens, Edward Scissorhands made an ice sculpture of an angel that looked like a girl he had a crush on. Who is the bigger hero and why?
This question is silly. Scissorhands.

It’s arguable that though he was acting out of an inherent sense of patriotism, Snowden’s leaks inadvertently endangered American citizens’ lives, while Edward Scissorhands accidentally cut the hand of the woman he loved while making that ice sculpture. Who is the bigger monster and why?
Morality is relative. We all have to make those determinations for ourselves. Edward Scissorhands’s heart was a cookie or something, but in the end, he was perhaps more human than us all.

Would you care to speak a bit more about the government’s persecution of Edward Scissorhands?
Let him out of that castle, guys. C’mon.