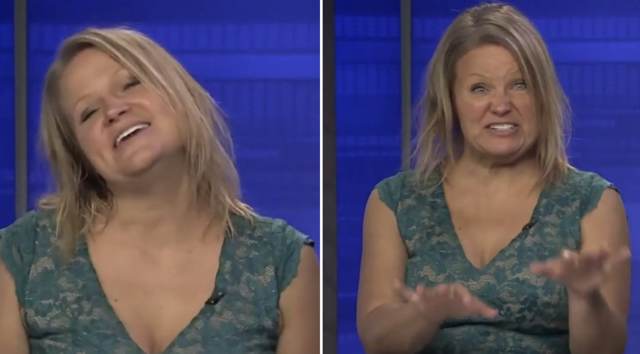 Viewers expressing concern over train wreck of local evening newscast out of Albany. Anchor Heather Kovar appeared disheveled, misspoke, and slurred her words for the entire newscast. Here, she tries to set up the weather and toss to the meteorologist, who’s name she gets wrong. pic.twitter.com/70jwwvykKt

She’s quite obviously under the influence of something, coming out with gems like:

“And so, moving on tonight, is we have to tell you also, you know, like other news that’s happening in the area, and across the area, in the nation.”

“Like, I was telling you this morning, if you watched us this morning starting at 6 a.m., 7 a.m., I told you, you know what? Today, what a beautiful day outside! It is just amazing. And so, a great time for outdoor music.”

It’s important to keep in mind that Heather presents a local news show, which means barely anyone watches it. Even still, her employers suspended her pending a further investigation, which may not actually be necessary because rather than accept the suspension, apologise for being drunk on live TV and put the whole thing behind her, Heather has decided to quit. She also blamed the whole mess on her bosses overworking her:

Heather Kovar update no. 5: In addition to exhaustion and a toxic work environment, it appears alcohol did play a role, too. A producer on the CBS 6 Albany newscast tells me Kovar was known to come in for weekend shifts “intoxicated”, but “not this bad”.

Ah yes, I too like to get smashed on tequila and show up to work bladdered when my bosses overwork me. Fair play to her for actually showing up in that state and getting through the segment. With that kind of work ethic it’s a wonder they’re not begging her to stay.

In any case, Heather is gone and likely destined for bigger and better things now she’s gone viral. Maybe her own talk show? Maybe a news show where she’s hammered all the time? Think Albany local news may have missed a trick there.

For the news anchor who was arrested after being found naked and passed out behind the wheel of her car, click HERE.