Various young boys from around the world are claiming to have magnetic bodies.

Have you ever wished that you had some sort of power? What would it be? Flying, x-ray vision and time travel are usually high up on the list, but it seems that all over the world more people, particularly young boys, have been following in the footsteps of X-men’s Magneto and appear to have the power of magnetism running through their bodies.

One boy in Brazil made his father very proud when he realised that his body is magnetic.11 year old Paulo David Amorim first discovered this ‘talent’ (?) when his father asked him to pass him some cutlery, which he then stuck to the boy, consequently realising that his son was magnetic. (We’re not one hundred percent sure why he thought he would put the cutlery on his son’s stomach in the first place but let’s not ruin the magic.) Paulo has been dubbed ‘magnet boy’ by his peers and relishes his chance to perform with various metal objects including cameras, pots and rather large pans.

Having heard about this boy we did some research and found other boys claiming to have similar powers including seven year old Bogdan from Serbia, who can also attract china plates as well as interfering with electrical items… 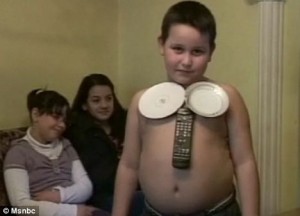 …and six year old Ivan Stoiljkovic from Croatia, who as well as being magnetic, claims to have superhuman strength as well as healing hands (and a really unhappy family by the looks of it). 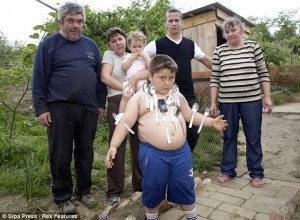 Aside from being a walking, talking fridge magnet I’m finding it hard to see what use could come from having this superpower but just being dubbed ‘magnetboy’ would probably be pretty cool.