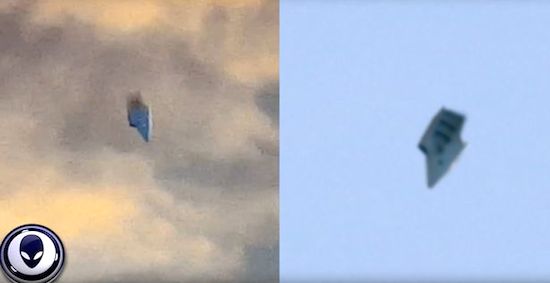 Following on from speculation that Barack Obama might be revealing the truth about UFOs before he leaves office, another new UFO video is going viral.

The video is shot near Dayton, Ohio close to the Wright-Patterson Air Force Base, which housed an Air Force project that documented alleged UFO and extraterrestrial sightings from 1947 to 1969. In the 13 minute video you can see a strange object in the sky, weaving in and out of the clouds.

Check it out and see what you think:

Well that guy certainly sounded convinced didn’t he? I don’t really know what the hell that is but it certainly looks weird and UFO esque and the fact that it was caught by a couple of different sources makes it more legit, although it doesn’t necessarily prove the existences of aliens of anything – it’s just some weird flying object in the sky. I suppose we’ll just have to wait for Obama’s big announcement to find out the truth, although chances are that’s going to be a flop too.

For more aliens, check out these women who claim they had sex with aliens and are giving birth to hybrid babies.