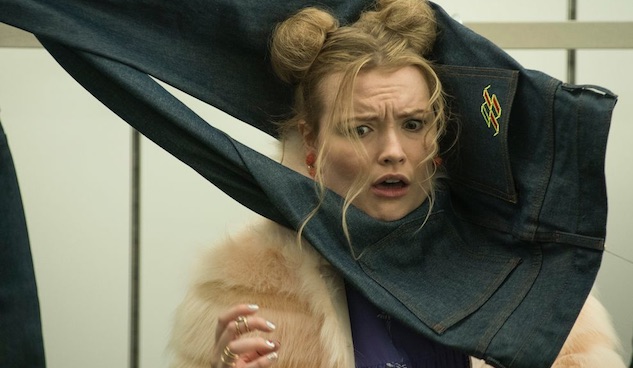 It never ceases to amaze me how people can come up with such great villains in horror movies and continue to do so years after the advent of Freddy Krueger, Michael Myers and Jason Voorhees, but maybe they’ve finally gone a bit too far with this stupid looking movie about a killer pair of jeans.

The film is called ‘Slaxx’ and is coming to Shudder in two weeks time and promises to be a gory affair if the trailer is anything to go, as we see people get dismembered and stuffed into compartments, have their thumbs chopped off and one woman getting strangled to death by the titular pair of dreams. Take a look at the trailer below and read the official synopsis underneath that as well:

A possessed pair of jeans is brought to life to punish the unscrupulous practices of a trendy clothing company.

Shipped to the company’s flagship store, Slaxx proceeds to wreak carnage on staff locked in overnight to set up the new collection.

When the body count mounts, the panicked staff disbands and the struggle for survival begins.

It is up to idealistic employee Libby to uncover the reason behind Slaxx’s blood thirst before its evil is released into the world.

To be honest that didn’t look nearly as stupid as I thought it would and it’s coming from the same producers who brought us ‘Turbo Kid’ and ‘Summer Of 84’ which were both movies with a stupid premise that turned out to be pretty awesome, so I reckon this one might be worth a watch. Although maybe the employee saying that they were on a lockdown might be a bit triggering for some of us given how the last year has gone when it seems like we’re so near the end. On the maybe pile for now.

For more of the same, check out this guy in skinny jeans knocking people out in the weirdest street fight ever. Kind of a similar vibe.