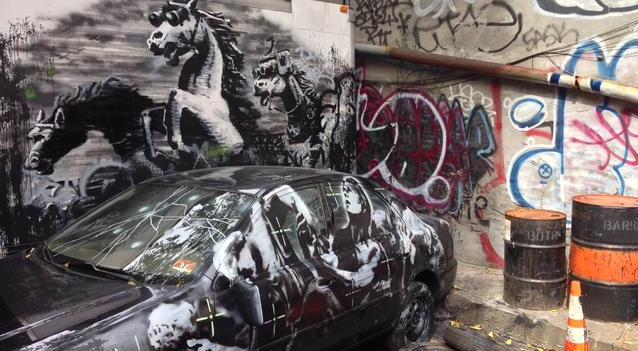 Banksy’s New York City scavenger hunt continues with a dramatic new piece being unveiled on the Lower East Side.

After we talked yesterday about how a crew of budding entrepreneurs were charging people $5 to see the new Banksy in New York City, his scavenger hunt around NYC has continued today with the unveiling of a brand new piece on the Lower East Side in an empty lot on Ludlow between Rivington and Stanton.

It’s definitely a real car and a real wall and looks great. The accompanying audio for the piece comes from a recording of an attack on Iraqi civilians in Baghdad in 2007 that was leaked to the public via WikiLeaks. It features two Apache choppers with the call signs ‘CrazyHorse 1/8’ and ‘CrazyHorse 1/9’ and one of the pilots can be heard stating ‘well, it’s their fault for bringing their kids into battle.’ 12 people were killed during the attack – including two journalists working for Reuters – and 2 children were wounded too, which is what the pilots are referring to.

A resident of the area, Richie Chang explained that there was a blue tarp all over the lot over the past couple of days which enabled Banksy to prepare the piece in peace and to unveil it as a surprise to everyone in the area. Smooth.

As with most art, I’m not really sure what he’s trying to say about it but it still looks sick. Videos on this page and some photos on the next one.