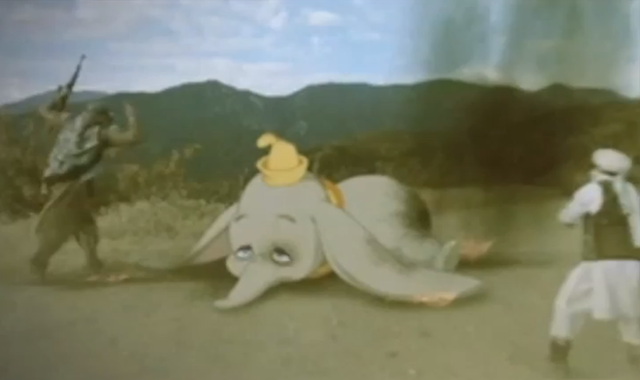 Street artist Banksy has released this video depicting armed rebels shooting Dumbo the elephant out of the sky. What could it mean?

Street artist Banksy posted this video of Dumbo being shot out of the sky by a group of armed rebels onto his website, alongside the caption: ‘I’m not posting any pictures today. Not after this shocking footage has emerged…’

Banksy’s work typically contains some kind of satiritical political or social message, so what could this one mean? Is Dumbo – the flying elephant being shot out of the sky and crashing to the ground – representative of children? Does the culture and practice of war destroy childhood innocence? Is that what the kick from the child at the end is about?

Banksy is currently in New York where he’s expected to churn out stuff like this for the rest of the month.