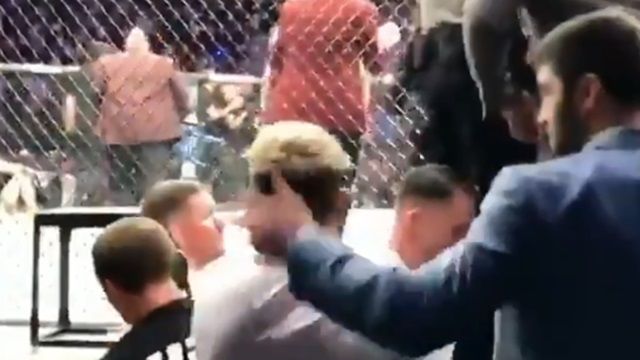 I really thought that today might be the day that people stopped banging on about Khabib and Conor McGregor, but no – more information has emerged that might finally settle once and for all why Khabib jumped over the cage and attacked Conor’s corner.

Previously the blame has been put on Conor’s cornerman Dillon Danis trash talking and insulting Khabib when he came over to shout at them after making Conor tap, but this new angle puts the potential blame on one of Khabib’s teammates Dominance MMA managing partner Rizvan Magomedov. He was one of the first people walking into the cage to congratulate Khabib, but knocked past Dillon and kept tapping him on the shoulder, obviously mocking Conor for tapping out in the cage.

This led to some kind of slagging match between the two of them, and when Khabib saw this he went absolutely ballistic:

This vid shows Khabib's Dominance MMA managing partner Rizvan Magomedov harassing Dillon Danis who pushes him away as Nurmagomedov notices the skirmish & jumps in to assist. Magomedov who can be seen in other videos scuffling with police trying to break up the brawl was arrested. pic.twitter.com/vP4iFiH219

Another clip of Magomedov throwing punches at Danis and trying to get around/away from police who eventually detain him. pic.twitter.com/fgBFZ1tEZJ

Seems to put things in a bit more context, I guess you can’t really tell what kind of adrenaline you’re running on after you’ve won a fight can you? Still, probably no excuse to jump the cage and legitimately attack someone is it? Hopefully this is the last we’ve heard of this until a verdict is meted out by the NSAC, but I seriously doubt that will be the case, don’t you?

For more of the same, check out this video showing all the ways that Conor McGregor cheated against Khabib. There were quite a few.