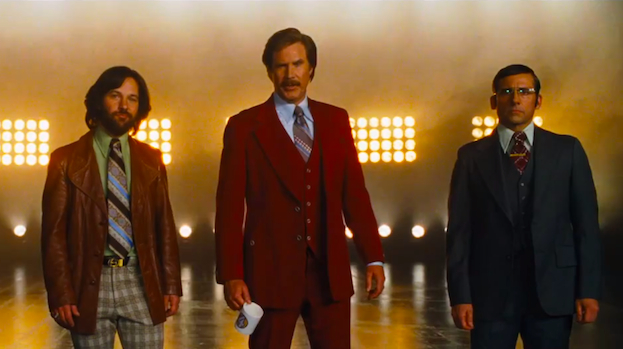 A new two minute version of the Anchorman trailer has been released that expands more upon the plot and features a cameo from Harrison Ford.

A new two minute trailer for the highly anticipated Anchorman 2 has been released and it’s teased more details of the plot and also includes a cameo from Harrison Ford, who appears to be some kind of character seeking to get Ron Burgundy kicked off of television. Harrison Ford is just one of many high profile celebrities who are confirmed for cameos in the movie, including Kanye West, Drake, Tina Fey, Amy Poehler, Nicole Kidman, Kristen Wiig and Vince Vaughn.

The trailer itself shows the Channel 4 news team become a success following the departure of Veronica Cornerstone after deciding to cover only weird and low brow news – sound familiar? Whilst the first movie spoofed attitudes towards women in the 1970’s, this new movie sees Will Ferrell confused by black and gay people, which should probably be just as funnier if not funnier than the first one.

It also shows the team investigating crack cocaine and even lighting up a pipe in the studio to try it, in what will surely be one of the funnier scenes in the movies, which is due out in the UK this Christmas on December 12th.