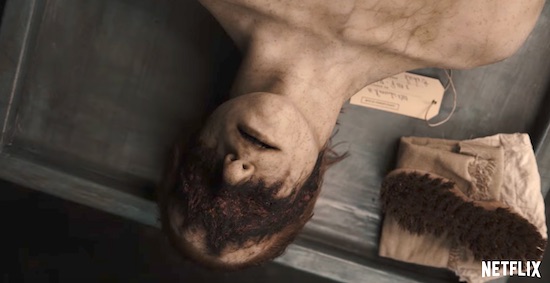 The question isn’t who kidnapped the children, but when?

Netflix is undoubtedly the best place to go for your TV show fix these days, but one part of its service that is sometimes undervalued is its capacity to pick up the very best in foreign television series and movies.

The latest acquisition in a long line of awesome programming on the streaming platform is the German supernatural thriller ‘Dark’, which tells the story of two children disappearing in a small German town and how this incident brings to light the fractured relationships and double lives of four families residing there. Take a look at the teaser trailer below, although it isn’t giving much away:

Yeah, like I said it’s not really telling you too much there and I’m not really sure what it’s all about but that trailer certainly got me interested and it looks like it’s gonna be one hell of an intense ride. That guy in the waterproof jacket looks like a real creepy villain too.

Pretty stoked for this, and like the trailer said not long to wait either until all ten episodes drop on December 1st. Until then, why not check out Big Mouth on Netflix to pass the time? Looks completely gross.