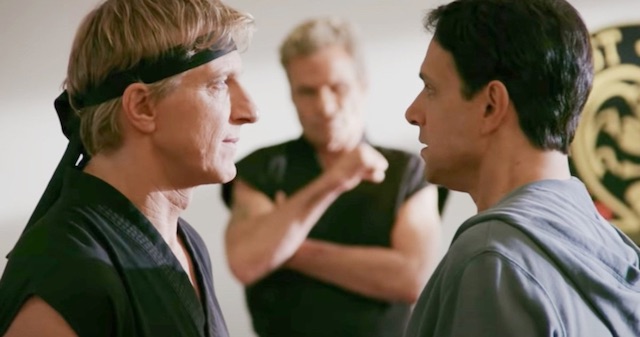 The gang is back.

I’m not gonna lie, when I first heard that there was a TV series about the characters from ‘The Karate Kid’ and the problems they were getting into thirty years later, I didn’t think it was going to be very interesting and that I would probably end up giving it a miss.

My favourite part about it was that there wasn’t a clear cut good guy and bad guy – everyone was just trying to get along and do their thing but sometimes they just end up getting in each other’s way and screwing everything up, much like real life. Only with more karate of course.

Anyway, Netflix has just released the trailer for season three which is dropping early in the new year and it basically looks like more of the same. Maybe don’t watch if you haven’t watched all of season two yet because there are some spoilers in there:

Yeah, just literally looks like more of the same dumb stuff and dumb fights happening with the same dumb characters, but I suppose if it isn’t broke then there’s no need to fix it. Looking forward to Johnny and Daniel LaRusso teaming up and acting like Tango & Cash or whatever they were supposed to be doing in that bit because you know that’s going to be extra stupid. Can’t wait – will probably binge it all in one day again.

For more of the same, check out this trailer to the ‘Saved By The Bell’ reboot, which is also way better than anyone ever expected.