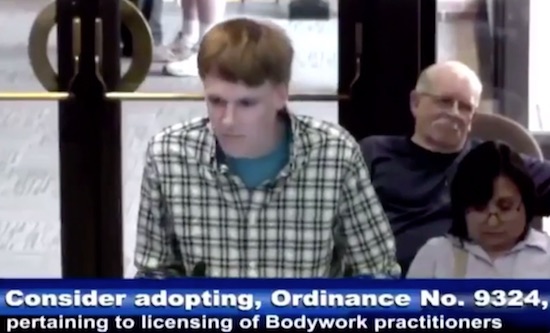 I haven’t ever really thought about the legality of a masseuse giving someone a hand job at the end of their session and I doubt many other people reading this have either. I guess if it happens then it happens, if it doesn’t then I’m not complaining and nobody needs to get arrested or fined about it anyway.

One town and one guy in particular clearly feels differently to me though. This video below is taken from Lawrence, Kansas where apparently the local council is looking at imposing some sort of law against masseuses giving hand jobs. This prompted one nerd to attend his town hall meeting and give an impassioned speech about why these masseuses should be allowed to continue what they’re doing.

Make sure you watch it all for an absolutely killer line at the end:

Mic drop. Can’t believe nobody sitting there applauded him as he walked off and they all just sat there in silence. Can’t believe they didn’t at least laugh or chuckle as well – how could they keep a straight face during that bizarre moment? I guess the guy in the back with the moustache was rolling his eyes a bit, but man I really expected more.

I know my opinion probably isn’t going to change much here, but for what it’s worth my boy up there has convinced me that these masseuses shouldn’t be persecuted and should be allowed to keep doing what they’re doing. Hope the motion doesn’t pass.

For more courtroom drama, check out these guys defending the LA party scene in court. Legends.