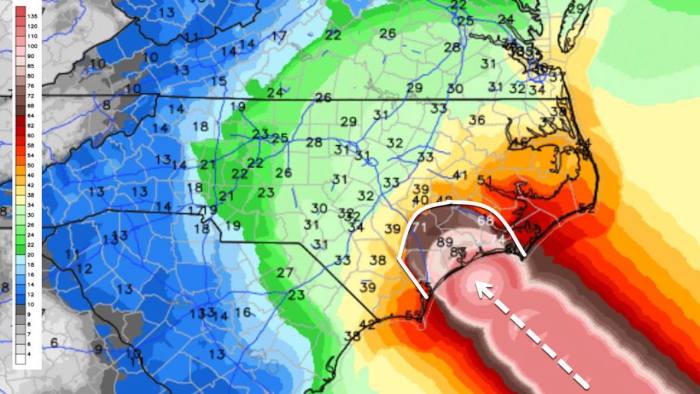 Hurricane Florence is currently making its way towards the south east coast of the United States and is set to be one of the most devastating hurricanes that the country has ever experienced with over 1.5 million people recommended to evacuate their homes before it reaches the land on Friday.

Despite this foreboding news though, the National Hurricane Service (I’m gonna call this the NHS for the rest of this article and I’m referring to that not the National Health Service FYI) has managed to lighten the mood by sharing a graphic of the path of the storm that made it look like a giant penis. I mean I know not everyone has the mind of a teenager and there are probably some pretty serious people working at the NHS, but surely they must have thought that people were going to say that about this picture? Just look at the head on it- why would you make that unless you wanted people to think it looked like a dick? 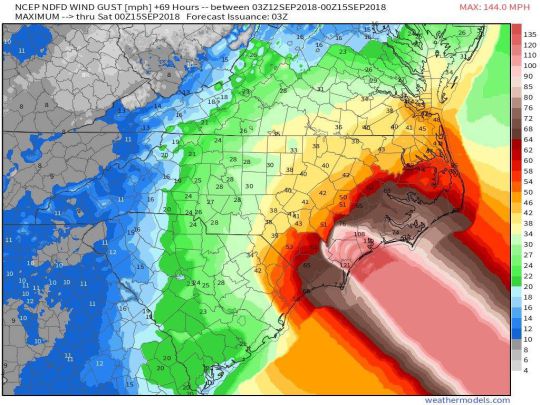 Really dumb decision by them but I suppose it has lightened the mood slightly before the storm causes an estimated $170billion worth of damage and destroys and an estimated 800,000 homes and businesses. You can always rely on dick jokes to heighten the mood.

However, although this graphic is pretty funny Hurricane Florence is clearly no laughing matter with a National Weather Service Forecaster in Wilmington spelling out just how serious the situation is:

This will likely be the storm of a lifetime for portions of the Carolina coast.

And that’s saying a lot given the impacts we’ve seen from Hurricanes Diana, Hugo, Fran, Bonnie, Floyd and Matthew.

I can’t emphasise enough the potential for unbelievable damage from wind, storm surge and inland flooding with this storm.

Those are some pretty weighty words. Hope everyone in the path of the hurricane is OK over there but I hope