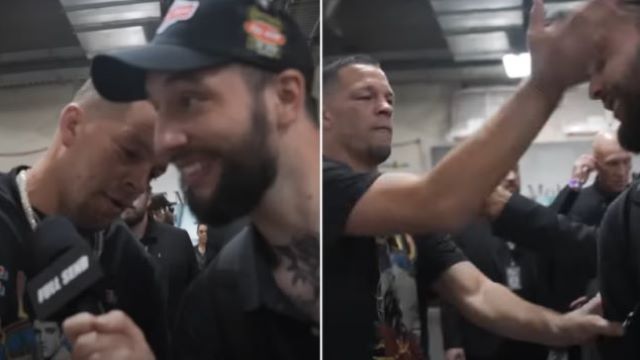 I don’t think anyone who has ever made fun of Nate Diaz has ever gotten away with it, which is why it’s so insane that this reporter for Full Send MMA thought it would be a good idea to approach Nate backstage this past weekend after Tweeting negatively about him.

Well in fact, it was Nate’s training partner Nick Maximov that the reporter had dissed on Twitter, but it’s all the same as far as Nate Diaz is concerned:

Welp, that’s what happens when Twitter meets real life. The reporter was really feeling cool about hanging out backstage with all the fighters too. I just love how everyone who witnessed it, including UFC security, just accepted what happened because Nate slapping someone is such a common occurrence that they just let it go. You can tell from how he sheepishly picked his hat up and walked away that the reporter knew he deserved it too. What can you say really? Nate’s gonna Nate.

To watch a man get knocked out mid Zoom-call, click HERE.