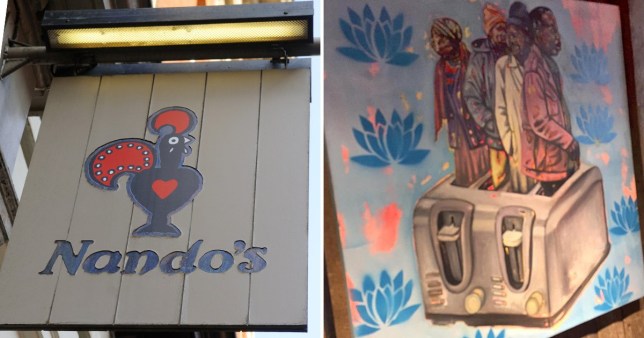 The Nando’s CEO has apologised over a ‘racist’ painting spotted at its newly-opened restaurant in Perry Barr, Birmingham.

Shockingly, the painting shows 4 black people popping out of a toaster. Yikes.

A ‘horrified’ customer who spotted the painting said that as a black man he found it ‘unacceptable, weird, and deeply offensive’ (via The Metro):

It shows four people of colour who would have been historically subject to degradation and hardship in an implement – here, a toaster – used to cook or burn bread.

To me, it’s akin to hanging a picture of someone in an oven or being chopped up. It’s completely dehumanising people of colour.

If it’s an apartheid era piece of work, it is shocking they would hang it in a South African-style food chain. 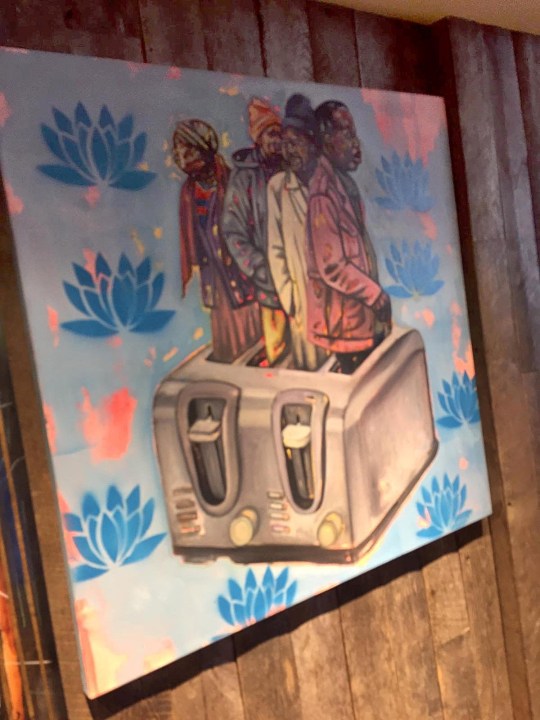 Rather than complain at the restaurant, which had opened the day before, the customer directly messaged Nando’s UK CEO Colin Hill on Linkedin and got a response.

Colin Hill apologised, saying the painting had been taken down and that the company would ‘review’ the selection process for artwork.

Nandos has the largest collection of southern African art in the world.

Our successful programme to support, sponsor and provide opportunities for developing artists is extensive and long-standing.

It’s one thing taking it down, but it’s another thing to make it clear to shocked customers that they won’t make similar oversights in future again. What would I tell a child, if they saw that horrendous painting on the wall? Everybody should be offended by this painting – black, white, and Asian.’

What does this guy want, a Nando’s black card or something? Obviously he’s right that hanging that painting on the wall is unacceptable and should never happen again, but all the CEO can do is apologise and assure it won’t happen again, right? Probably an absent-minded employee selecting pieces of art all day who didn’t use his brain for two seconds. Not sure what else they can do but apologise and fire/sort out the painting selection person, which is what he said he’ll do.

Unless there’s another one of these paintings hanging up at another Nando’s store in the UK. No doubt they’ll have a sweep underway already.