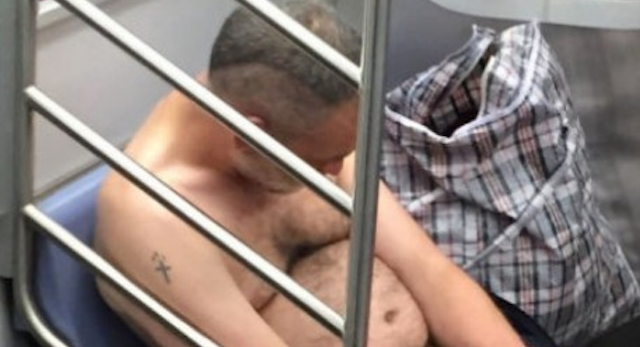 When your day goes from bad to worse.

There isn’t any information about who this guy is or what he was doing – just that a magazine editor named Peter Davis managed to take the snap on the A Train in New York City over the weekend. The photograph begs a lot of questions though: obviously, why the hell was he naked and sitting on the tube but also stuff like why didn’t he take off his running shoes and socks if he wanted to be naked? Where the hell was he going? Why is he naked when he looks like he has a bag of clothes next to him? And how can you get onto a train naked with nobody seeing you and doing anything about it?

According to Davis, the man seemed oblivious to the growing crowd around him and would only wake up to take sips out of a bottle of Jack Daniel’s. Classy. He rode the subway for around six stops starting at Fifth Avenue and 53rd street before getting up and getting off on 23rd street. Apparently he had a sip of whiskey for every stop and kind of looked at Davis as he took the photograph but didn’t really seem to care about it at all. YOLO.

It seriously is a headlock as to what this guy was thinking and it only got worse for him.  After Davis tweeted it to all his followers and it wasn’t long before the picture ended up on the front page of the New York Post with the tagline ‘Just another story in the naked city’. It was probably a big seller to be fair. It’s highly likely that this dude doesn’t have Twitter or the money to buy the New York post or the inclination to even check it out – I mean he’s sitting naked on a subway train – but even so you can’t help but feel bad for the guy.

Still, at least he didn’t get completely bitch slapped on the New York subway like some people this weekend.

I just took this photo on the A train and thought of my homeboy @FATJEW XOXO Freedom Train!! pic.twitter.com/uhBqXQsYMZ

My photograph is the cover of The @nypost #photography #photojournalist pic.twitter.com/x3dDxElYdV