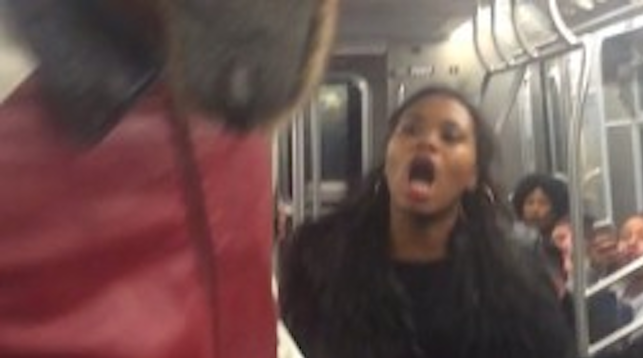 It’s never right to hit a woman, but can you say she didn’t have this coming?

I would never ever condone hitting a woman under any circumstances, but videos like this and this bus driver uppercutting a woman in Cleveland do make you sympathise slightly with the perpetrators because the women are being such bitches. It still shouldn’t happen though.

In this new video, everyone is riding on the New York City subway, when some bitches are just basically hating on everyone in the cart for reasons that are completely unclear to me. They punch and hit people – including whacking the phone out of the guy who’s filming its hands – and are generally just being completely raucous and antisocial.

The last straw occurs when one of them hits a guy in the head with her high heeled boots and lights the blue touch paper. He retaliates by giving her one of the most god forsaken slaps of all time – the kind that you might describe as being heard all around the world. Once that goes down, shit gets ugly and kicks off and doesn’t really calm down by the video.

I’m so glad I don’t commute via public transport.