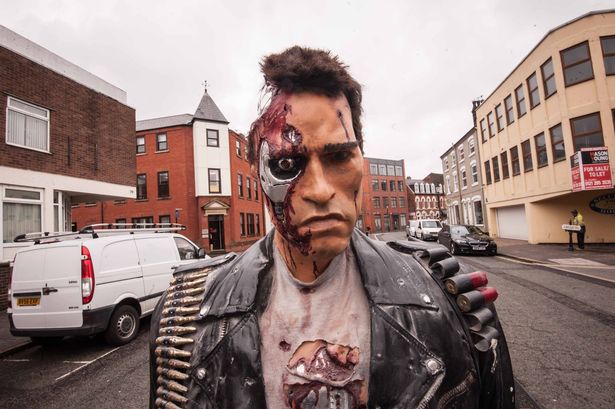 The Terminator is one of the most instantly recognisable and iconic film characters of all time, so you would be forgiven for thinking it was puzzling that its latest appearance would be on the back streets of Birmingham.

Nevertheless though, this is where a six foot statue of the T-800 was discard this morning in the city’s Jewellery Quarter outside The Eight Foot Grocer cafe on Caroline Street. Owner Chris sent out the following tweet and then said the following:

The statue wasn’t there yesterday, but had mysteriously appeared when we arrived to open up on Tuesday.

It is stood in the middle of Caroline Street, keeping guard over the Jewellery Quarter.

We tweeted a picture of it early on Tuesday, but as of yet nobody has come forward to claim the statue.

No-one knows where it has come from.

Spooky. The obvious explanation here is that someone has decided to dump this Terminator statue because they don’t want it anymore, but that seems completely ridiculous when you see how awesome it looks. Even if you don’t want it, surely you could have found a friend who would absolutely love to keep it in their lounge or back garden?

The other explanation is that it’s promoting some kind of new Terminator film/attraction in Birmingham, but again that seems kind of an unrealistic first move for a franchise as big as the Terminator. I guess we’ll just have to wait and see what happens and if anyone owns up about it in the coming days.

For more of the same, check out what the Spanish Terminator says instead of Hasta La Vista, baby. Jokes.