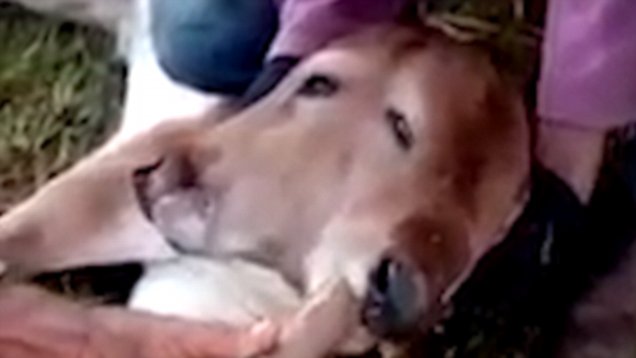 ‘Probably the result of inbreeding.’

Whilst it might seem with this heat wave and England making it to the semi finals of the World Cup that everything is finally going right for the nation, the recent collapse of the government (again) and several other world events could actually mean that these are actually signs of the end times. Think about it – when does anything this good ever happen and not have negative consequences?

If you need any more evidence that something might be going seriously wrong in the world then look no further than the video below. Coming from the Brazilian town of Caiponia, it features a cow who has born with two heads and two pairs of eyes attached to one skull and to say that it’s freaky would be an understatement.

Nobody knows why it was born, but the farmer’s wife Zica Soares said the following about it:

I never imagined something like that would be born here, we are surprised.

The vet says that we need to either put the calf down or look after him until the end.

He is very bad, really weak, but I am looking after him.

It was probably a case of inbreeding that caused the calf to be born with the anomaly.

It is a very rare situation.

Tragically, the calf died shortly after the video was taken, probably for the obvious reason that it had two heads. Sad.

But yeah, you can’t really deny that this one messed up situation coupled with everything else going on at the moment might be a clear signal that the world is going to shit. Hopefully England manage to win the World Cup before that happens though.

For more of the same, check out this guy feeding a two headed snake. So weird.