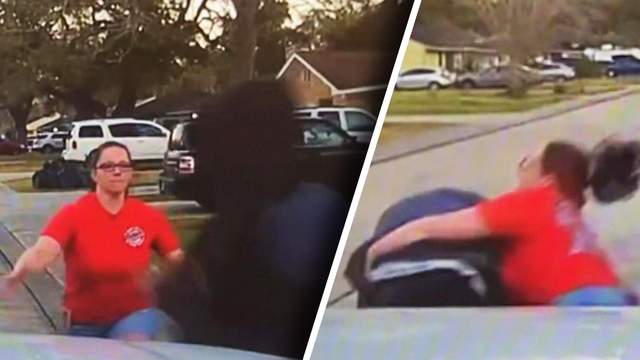 Police dashcam footage has captured the moment a Texas mum tackled a man she spotted peeping through her 15-year-old daughter’s bedroom window at 7 in the morning.

Click2Houston News reports that Phyllis Pena had returned to her Lake Jackson home from the shops when she saw a man later identified as 19-year-old Zane Hawkings peering into her home.

Phyllis called the police, but Hawkins attempted to flee as they turned up. Phyllis wasn’t about to let that happen though, and instead took the teen down with a beautiful rugby tackle:

Whoa, great tackle mum! Perfect form! Great positioning too! Love how she strafes a little bit as she sees him coming and times the takedown to absolute perfection. Better than most of what we saw at the Super Bowl last Sunday. And she did it without shoulder pads too!

Let’s hope the peeping Tom hit his head hard enough to forget what he saw. Should have known he was messing with the world’s most badass mum just from the fact she’d gone to the shops and back by 7am. Pretty militant if you ask me.

To watch an angry mum confront her son’s bully and threaten to rip his face off, click HERE. I’d take that warning if I were him.